Teamwork Brings The East to the Silver Screen 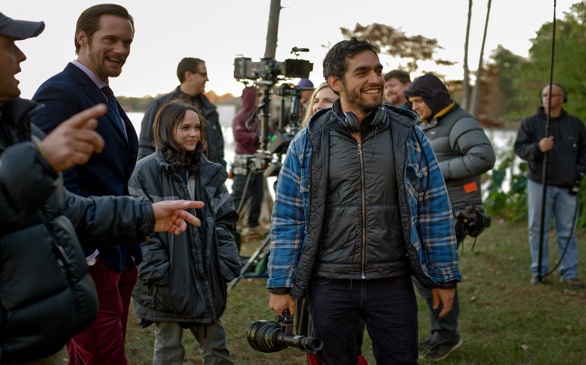 In The East, Sarah Moss (Brit Marling) is a brilliant operative for an elite private intelligence firm whose top objective is to ruthlessly protect the interests of their A-list corporate clientele. She is assigned to go undercover to infiltrate an anarchist collective known as “The East,” who have executed covert attacks on major corporations.

While living amongst them in an effort to get closer to their members, Sarah finds herself unexpectedly torn between two worlds as she starts to fall in love with the group's charismatic leader Benji (Alexander Skarsgard from “True Blood”). She finds that her life and her priorities have irrevocably changed.

Campus Circle sat down to talk to writer/director Zal Batmanglij, Marling and Skarsgard about bringing The East to the big screen.

Campus Circle: Tell us about the process of creating this story together after spending time living with anarchist collective. How did you decide this was the tale you wanted to share?

Brit Marling: A lot comes from remembering to live your life, but sometimes we get so caught up in linear progression. Sometimes you can forget to live with a sense of a desire of adventure, to explore and put yourself out there in intense ways. Zal and I spent some time on the road travelling and lived with different anarchist collectives and different farms. We weren’t doing that as research or because we wanted ideas but because we were living our lives and trying to make sense of them…all of that later became really rich material for telling this story. Anytime I feel like it’s time to start writing again, it’s like it’s time to go and have a new experience – fall in love, get your heart broken. Take a one-way trip to some place with no bag, and see what happens. I think good stuff could come out of that.

Zal Batmanglij: We kind of passed the story back and forth between us…we spent a lot of time just telling each other the story, trying to make it feel real. When we have a script and get lucky to have someone like Alexander, we bring him into the process and so the story is always evolving. When it’s good, it never feels like it’s ours; it’s something we are sharing together.

CC: How did the story transform as filming progressed?

Alexander Skarsgard: That’s what’s so lovely about these guys: There’s no ego. They wrote the script; it was such a collaborative process. We were out there together. We’d get together every weekend and just sit and look at the upcoming scenes for the upcoming week and just play around with it. Say like, “Oh this is a great scene, how can we make it not better but different? What happens if we go this direction?” We just tried it a whole bunch of different ways. That’s what’s so lovely when you’re on set, and that doesn’t happen often. It’s not like this is the script, learn your lines, show up, hit your tape mark...it evolves. It’s a surprise, and we’d change and tweak things…we’d show up and have an idea of how I would play it, in which direction I would think the scene would go, and then it all changed. I know we all loved those moments…

CC: So this picture was birthed trough a more collaborative process?

ZB: That’s why you make a movie, otherwise I’d be in animation or something pre-visualized. No matter how much you write it, how much you prepare, you figure out the shot. What’s cool is when all of the elements come together. When Ellen Page interacts molecularly with Alexander Skarsgard who interacts molecularly with Brit Marling, the quality of the sun at that time, what the camera is picking up, what lens we’re using, just the way the costumes are affecting the background – you can never anticipate that…

AS: …I’ve worked with directors…they’re not curious...they’re more like ‘Do this. This is how I want this.’ It can work, but it’s also more fun creatively as an actor when you work with someone who’d actually sit there behind the camera and be like ‘Oh man! This is really cool! Wait-wait! Go further, go further! Try what happens if you go this way.’

ZB: Directing is like hosting a dinner party, and so I’m the kind of person who likes to invite people to come help cook and come help clean up. And other people are very regimented, they want everyone to sit in the exact same place, and that’s fine too. I’ve had fun at parties like that.

Interviews
Maleficent doubts her fitness as a mother. So did Angelina Jolie
967 views