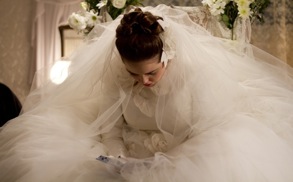 Writer/director Rama Burshtein lets outsiders take a peak into a very private and unique world in her new film, Fill the Void. In this film, Burshtein delves into the private traditions of the ultra-orthodox Hasidic Haredi community in Tel Aviv, Israel.

Fill The Void tells the story of Shira, a young teenage girl on the brink of entering womanhood. She is ready to meet her matched suitor who will eventually become her husband. However, during the happy celebration of Purim, her older sister Esther suddenly dies while giving birth. Left behind is Esther’s grieving husband, Yohai, to care for his infant son Mordechai. His mother-in-law Rivka and Shira begin to tend to the baby’s needs and are happy to have the baby around.

However, Yohai’s mother eventually tries to encourage him to find a new wife to care for the baby. Rivka can’t bare the thought of losing her grandson so she suggests the idea that he marries Shira. Suddenly, Shira is thrown into a world of confusion and sadness, and starts to feel a loss of her once bright future.

Shira, played wonderfully by actress Hadas Yaron, displays such strength when faced with a very difficult choice. She yearns to have something new and fresh with her chosen suitor, but now she must consider her late sister’s husband as a future spouse.

The acting is so natural, and the dialogue is so distinctive – it feels as if you are eavesdropping on private conversations. The camera zooms to get close-ups of the actors without feeling intrusive. It makes the grief and angst among the characters that much more powerful.

Fill The Void also allows us to see traditions that are normally private. The audience glimpses a culture that is based on very traditional, orthodox roles for men and women where marriage is the ultimate goal. For example, Shira’s aunt Hanna suffers from a disability, never gets married and is looked upon with pity. The line frequently used for the unmarried is, “May you be next.”

Burshtein fills the film with musical chants sung by men. The sounds bounce off the screen, and we see the joy and sorrow expressed through music. These chants enhance many scenes, but at times can be a bit overwhelming and burdensome.

Rivka (played by Irit Sheleg) and Yohai (played by Yiftach Klein) forge an unaccustomed relationship since the death of Esther. We see Rivka’s palpable desperation as she pushes her other daughter towards Yohai.

Every actor respects the story they are telling by playing their part beautifully. Shot with softness and a gentle direction, Fill the Void is a fantastic debut feature for Burshtein, who is a female Orthodox. She attended the Sam Spiegel Film and Television School in Jerusalem, and during that time, she became deeply religious. After graduating, she dedicated herself to promoting film as a tool of self-expression in the Orthodox community.

There are few flaws with this story, and you’ll find yourself fighting for Shira and her innocence. Fill the Void  is quite a cultural eye opener.

Fill the Void releases in Los Angeles and New York on Friday, May 24, 2013. For more information on the film, click here.