USC Made Its Offer to Neuroscientists A No-Brainer 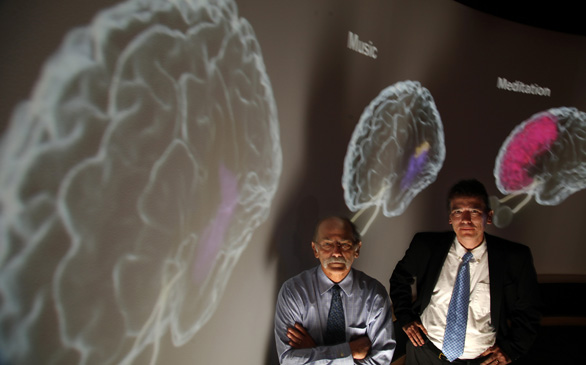 The courtship that has riveted the neuroscience world blossomed at a Saturday night dinner in a tony Brentwood, Calif., restaurant.

USC provost Elizabeth Garrett and executive vice provost Michael Quick kept the conversation light. Over chicken with braised leeks, onions, mustard bread crumbs and white wine at Tavern, they talked to UCLA neuroscientist Arthur Toga about his life. Not the brain imaging research for which his lab is renowned but about "the things that get you excited in the morning," Toga recalled. "What's really important to you. Fun conversation."

In the end, USC's recipe turned out to be a winner. Driving home that February evening, Toga said, "I knew I really wanted to work for these people."

He and his UCLA colleague Paul Thompson, along with what they anticipate will be dozens of other staff and graduate students in their Laboratory of Neuro Imaging, will make the crosstown move in the fall. They'll bring with them millions of dollars in annual research funding - not to mention considerable prestige for USC, which is trying to solidify a leadership role in the cutting-edge fields of neuroscience and informatics.

Like other high-stakes recruitment at the top of the academic world, the wooing involved an "all hands on deck" push from high-level administrators and scientists. Enticements included money, promises of prime real estate and the prospect of new research collaborations.

But beyond that were the squishier factors common to any job search: commute time, family impact and just how much change the scientists wanted in their lives.

"It was a move that was professionally terrific but didn't involve forgoing any of the lifestyle factors in Southern California we all live here for," Thompson said.

Crosstown USC was new enough but familiar enough too, the two men said.

It wasn't the first time USC had tried to lure Toga and Thompson's celebrated lab, which uses powerful computers to analyze huge quantities of brain imaging, medical and genetic data to help understand such diseases as Alzheimer's and autism. The university has a policy to hire away big names from other schools and had tried unsuccessfully to attract the UCLA team three years ago.

At that time, UCLA made a strong offer to keep the lab, adding space and other resources, both sides said.

But on Dec. 15, the Trojan camp realized it was time to restart its overtures. A USC faculty member who knew Toga tipped off Quick, the executive vice provost, that the UCLA professors were in talks to move to the University of Pennsylvania.

"That meant they had to be movable," said Quick, who is also a neuroscientist.

Quick enlisted another recent USC recruit, biological imaging expert and former Caltech professor Scott Fraser, to call Toga and "see if there was an opening."

There was. On Dec. 19, Toga and Fraser met in Quick's office. By Christmas Eve, Dr. Carmen Puliafito, dean of USC's Keck School of Medicine, had joined the effort.

By Jan. 1, the process was fully in motion.

"This was a fast recruitment," Quick said.

Over the next two months, Toga and Thompson spoke with many people at USC. "I wanted to hear the dirt, what are the problems there," Toga said. "I needed to know this because I was about to make a big life decision."

He said he heard very few complaints - a rarity in academia.

During one of several tours of campus, Thompson noted how Puliafito acted in a friendly way both to top doctors and to janitors, remembering personal things about them.

While contract details are crucial, so are "trust and compatible visions" and a sense that the people will be pleasant, Toga said. He felt he'd have more latitude to get things done at the private university than he had at the public UC campus.

The process of "getting a feel for each other" culminated with the dinner in Brentwood, Quick said.

Toga and Thompson insist nothing in particular pushed them out of UCLA and that, since most of their funding comes from federal and private grants, state budget cuts to UC mostly didn't affect them. But USC could sweeten the deal in various ways made possible by its significant success in fundraising.

The parties began hashing out details in March. No one would say whether raises were involved; according to a UC website, Toga earned $1.06 million and Thompson $421,150 in 2011.

But sources confirmed that USC did offer additional staffing and several options for a new, larger space. The university centered its pitch on the idea of a new USC Institute for Neuroimaging and Informatics featuring Toga and Thompson, who would be able to work closely with faculty from the medical and engineering schools.

Toga and Thompson wanted to make sure that their graduate students and postdoctoral fellows would benefit from the move. Among other things, it will be easier for them to stay with the research group as their careers progress.

Logistics were a consideration as well. Toga and Thompson had been pondering the difficulties of moving their high-tech equipment 2,700 miles to Penn. Such interruptions can delay research projects for more than a year, giving competitors a chance to jump ahead and frustrating funders who are looking for timely results, Quick said.

But Puliafito seemed to anticipate these hurdles "like a chess player who thinks 11 moves ahead," Thompson said. He and Toga came to believe that the risk of losing momentum would be much smaller going across town instead of across the country.

Garrett, the USC provost, said that part of her pitch was simple: "If you are going to leave UCLA, why not stay in L.A.? You don't have to uproot 80 to 100 people, and that makes the choice a lot easier, a lot less daunting."

Representatives from Penn declined to comment on their talks with the pair.

Thompson, who grew up in chilly Britain and now lives in Redondo Beach, dreaded the prospect of Philadelphia winters and the hardships a move would pose for staff, his wife and 9-year-old daughter.

"It hinged on the trade-off between professional gain and personal sacrifice," he said.

Toga, who lives in Northridge, said that he and his wife were reluctant to relocate far from their three grown children, who live in Southern California.

He did what many Angelenos do when pondering a job change: He tried out the commute. For years he fought the southbound 405 to get to his Westwood lab. To reach USC's health sciences campus in Boyle Heights, he took the 118 across the Valley to the southbound 5.

The mileage was a bit more but the drive was 10 minutes shorter. Commute time was a minor point, but a good omen.