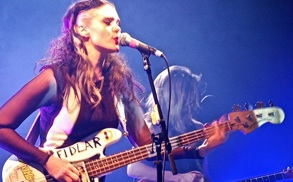 If you’re of the mind that feminism can’t be fun, get yourself to a Kate Nash concert stat. With the Echoplex engorged with “grrl” power, the British songstress crowd-surfed, invited a motley crew of backup dancers onstage and even sang the praises of Kim Kardashian.

Her ferocious caterwaul and all-female band were a far cry from the more prim pop of her 2007 debut, Made of Bricks, but Nash has grown into a true feminist icon. She told the audience of her after-school program for girls back in the U.K., brimming with pride as she spoke of one 14-year-old “badass bitch” who started an angry band herself. She encouraged all women to arm themselves with guitars and four chords because she said there aren’t enough “xx chromosomes in rock.”

And rock she did, tearing through screamers such as “Sister” and “All Talk” off her self-released 2013 rally cry, Girl Talk. Guitarist Linda Buratto hoisted her instrument like an army flag, waving it around as she blazed through crunchy solos. Nash gave older tracks like the cheeky “Foundations” new life as she replaced her signature piano’s “twinkling” with caffeinated riffs.

Contributing to the fun factor was Peach Kelli Pop, a Canadian-Californian bubblegum outfit that covered the “Sailor Moon” theme song and coasted on honeyed harmonies. The Ramones, the Donnas and the Go-Go's came to mind as singer/guitarist Allie Hanlon sang of teenage romance and sweet nothings.

Despite taking flack from the media for her seemingly radical musical shift, Nash boldly lives as she likes and challenges others to do the same. It’s telling that her set was introduced by Lesley Gore’s “You Don’t Own Me”— Nash just wants to be allowed to be herself. That’s all she asks.