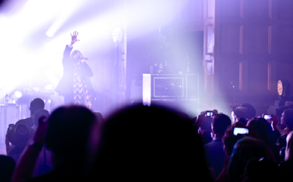 Thirty Seconds to Mars is known for being open with  fans and promoting shows in very upfront ways. For this intimate show at L.A.’s Historic First Unitarian Church, the band invited 250 of its most loyal fans to celebrate. KROQ’s Ted Stryker introduced the band and announced the new release of the band’s record before handing the mic over to the guys.

The night began with a few lighting difficulties, but the acoustics were fantastic. The acoustic “Kings and Queens” from their previous album, This Is War, was my personal favorite.

A few songs in, front man Jared Leto stopped the show and invited one fan on stage, saying she had been crying the entire show, and she should join them. Fourteen-year-old Chloe got on stage and although she was hiccuping and still crying, you could tell she was thrilled to be on stage with the band. Leto tried to have a conversation with her, but not much could be done, so they continued to play.

Thirty Seconds to Mars, made up of Leto, his brother Shannon and Tomo Mili?evi?, was in full celebration mode! New album Love, Lust, Faith and Dreams came out that ni, and the show was like a big party to celebrate the release.

On a slightly more unusual note, the band had been promoting what they called “the sleepover.” For this, the band invited five fans from around the world to sleep at Leto’s house. While many people attacked him through e-mail and social networking sites, claiming that it was strange and irresponsible for Leto to bring people into his home, he stood by the decision and brought one more person from last night’s festivities into "the sleepover."

The band is quite divisive. People either love them or question their sanity, but they definitely put on a good, enthusiastic, intimate show. If they want to open their homes to fans, who’s to say that is not okay? Known to do extreme promotions and fan-involved videos, the boys of Thirty Seconds to Mars are champs at keeping in touch with their incredibly loyal fan base.

Thirty Seconds to Mars is hitting off their tour and will be on the road for the festival circuit as well as headlining shows in the coming months.

For more information on Thirty Seconds to Mars, click here.