Before Midnight Explores the Beauties and Pains of Love 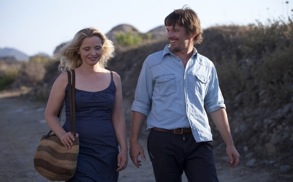 Over the span of 18 years and three exceptional movies, director Richard Linklater and his collaborators Ethan Hawke and Julie Delpy have charted the birth, growth, crescendos and complications of love.

The mesmerizing third installment, Before Midnight, co-written by Linklater, Hawke and Delpy, delivers a humorous and heart-wrenching look at the depth and banality of long-term love. It is a bold work that could come only from a strong trust and faith forged over time between the three collaborators.

The trio began their journey with 1995’s Before Sunrise, which introduced audiences to Jesse (Hawke) and Celine (Delpy), two starry-eyed young travelers who meet in Vienna and spend a day tickled and tantalized by the glorious possibilities of love and life at the dawn of adulthood. The walk-and-talk film spoke to Linklater’s great ear for dialogue, ease with philosophical gymnastics and love of European cinema.

The 2004 follow-up, Before Sunset, had the two connecting once again, this time in Paris. After a failed rendezvous six months after their initial meeting, Jesse runs into Celine while promoting his book, This Time, which chronicled their youthful romance. With both involved in unfulfilling relationships (Jesse married with a child in Chicago and Celine dating in Paris), the two fell into their old rhythms and reached out through the dense fog of time to see if their initial connection still had breath. The moving and subtly ambiguous film left audiences wondering what would come of the compelling love story.

Before Midnight catches up with the couple and their family during a leisurely summer in the southern Peloponnese of Greece. In Before Sunset, Celine wondered if they were just “good at brief encounters, walking around in European cities in warm climate.” The latest film finds the couple in similar circumstances. But, unlike before, Jesse and Celine now have a history and a future. They were with each other yesterday and will be with each other tomorrow. Their relationship carries that weight.

Like the first two Before movies — and other Linklater film’s such as Tape, Slacker and Dazed and Confused — Before Midnight takes place in one day. Jesse and Celine’s lives have a sense of permanence now, but during the course of a long day mostly spent walking and talking, they realize that maybe they don’t share the same ideas for their future. Maybe they don’t even share a similar perspective on the current state of their union.

The opening shot fittingly features two pair of feet walking through an airport. But, as a sign of the changing times, one pair belongs to Jesse’s son, Hank (Seamus Davey-Fitzpatrick). After spending the summer with his dad’s family in Greece, the teenager is returning to his mother in Chicago. Jesse gives his son a sorrowful goodbye, a mood captured by Austin composer Graham Reynold’s spare and plaintive piano full of longing. The film’s minimalist score matches the natural movement of the film and plays off the waltz motif that still lingers from Delpy’s song at the end of Before Sunset.

Jesse departs the terminal and joins Celine and their two daughters in the car for a ride back to their summer residence. The shots of children give the immediate impression of Jesse and Celine as adults. No longer the children in love from Before Sunrise, they are now burdened with the care of their own children. But their conversational style still has whispers of youthful flirtation.

The couple engages in witty, well-worn banter freighted with subtext. Jesse wonders if he should be closer to his son, while Celine wrestles with the prospect of taking a new job in Paris. The subtle tensions play as comic relief but nod to the type of lingering issues that can divide a couple. It is one of several scenes that illuminates Jesse as a romantic and Celine as a pragmatist and borderline pessimist while also highlighting the trilogy’s fascination with the passage of time.

The steady long shot in the car ride is reminiscent of the cab scene at the beginning of Linklater’s Slacker and Jesse and Celine’s streetcar trip in Before Sunrise. The exchange between Hawke and Delpy is a master class of acting, and their familiarity evaporates the years audiences have spent apart from the two characters.

At the home of their Greek host, Jesse and Celine relax into a salon-style discussion with two other couples and two elderly friends about the nature of time and perception, the effect technology has on our sex lives and the innocence of young love. Fans of the earlier movies will recognize nods to Shakespeare and time travel, in the afternoon of amiable free-flowing discussion that unwinds like an idyllic Mediterranean afternoon. The tableside chat also catches those less familiar with the backstory up to speed and fills in the narrative gaps between films.

With their return to Paris looming, Jesse and Celine accept their friends’ offer of a romantic night at a nearby hotel. Linklater’s camera follows the couple (or, really, the couple follows the mostly backward-moving camera) as they amble amongst Greek ruins and ancient churches on the path to their hotel. The stroll gives the couple their first chance to casually walk and chat for the first time in years, and the conversation reveals how their lives have hardened and taken on new dimensions defined by obligation and sacrifice.

When Celine asks Jesse what he would change about her, the timer is set on a slow-ticking bomb that will inevitably detonate. In their beautiful hotel room, Jesse attempts to seduce Celine and rekindle the heat that first fueled their affair. But life interrupts, and simmering tensions born of jealousy, regret, longing and fear overflow in one of the greatest 30-minute stretches of dialogue ever captured between two lovers on screen.

Less dizzying than its predecessors, Before Midnight is rooted in the sometimes painful ground of truth. While the first two movies in this series offered hope and possibility with two lives yet to be fully explored, Before Midnight finds the two lovers forced to reconcile their lives with the choices they’ve made. It is a painful emotional experience, but not a hopeless one.

A near-perfect movie, Before Midnight is a moving examination of the perils and pleasures of aging and the difficulties of maintaining passion and a sense of self while being part of a couple. It devastates and inspires the way only love can.

Before Midnight releases in theaters on Friday, May 24, 2013. For more information on the film, click here.