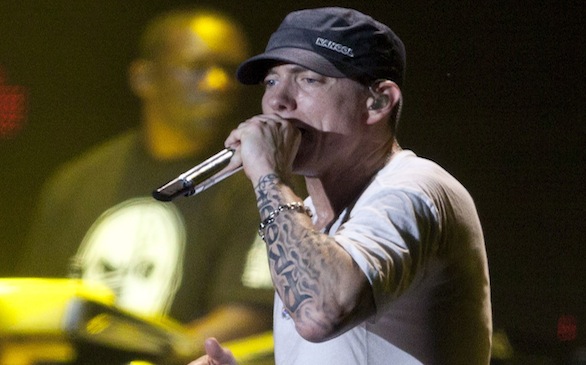 Eminem's song publisher is suing Facebook and its ad agency, claiming they infringed the rapper's copyright.

The 30-second ad, dubbed "Airplane," was featured in a webcast by Facebook chief Mark Zuckerberg to announce Facebook Home, an interface for Android phones. Some viewers at the time noted a similarity between the ad's music and Eminem's song.

The complaint claims the ad agency, Wieden+Kennedy of Portland, Ore., copied Eminem's music "in an effort to curry favor with Facebook by catering to Zuckerberg's personal likes and interests, and/or to invoke the same irreverent theme" of the song.

A version of the commercial featuring new music was posted to YouTube several days later. That version has also since aired on television.

The lawsuit contends the alteration "was an admission that Facebook knew it had infringed" on the Eminem song.

This isn't the first time Eight Mile Style has taken on a tech giant: Apple reached an out-of-court settlement with the publisher in 2005 after using Eminem's "Lose Yourself" in an iPod commercial without permission.

Audi agreed to a settlement in 2011 after using a "Lose Yourself" sound-alike song in a European promotional clip.

The Facebook Home media event took place in early April - the same week that web sleuths made headlines by purportedly turning up the old Angelfire homepage of a teenage Zuckerberg.

Further twisting the plot: Wieden+Kennedy was the firm behind Eminem's famed Super Bowl spot with Chrysler in 2011 that featured an authorized version of "Lose Yourself."

Eight Mile Style had complained to the ad agency directly in April about the Facebook ad music. In an April 29 response obtained by the Detroit Free Press, a Wieden+Kennedy attorney argued that Eight Mile Style had no grounds to assert copyright, saying the Eminem song passage had itself been copied from Michael Jackson's 1991 song "Give In to Me."

In the letter, attorney Guy Cohen attributed the writing and production of "Under the Influence" to periodic Eminem collaborator Dr. Dre, who Cohen contended "has a long, well-documented history of copyright infringement."

"Under the Influence" was, in fact, co-written by D12 and produced by the Bass Brothers, the Detroit duo who handled much of the rapper's work at the time.

"I find it so arrogant, after they did so well with the Chrysler-Eminem campaign, that they would say Dr. Dre stole this from Michael Jackson," said Eight Mile Style head Joel Martin.

Even setting aside any Michael Jackson issue, Cohen wrote, the music in the original Facebook spot "simply is not substantially similar" to the Eminem song.

Moreover, he wrote, Wieden+Kennedy has "taken steps to ensure that the earlier version of (the Facebook ad) is no longer publicly available."