Hawk and Dove: This Yesterday Will Never End

(Big Round)
By Doug Simpson 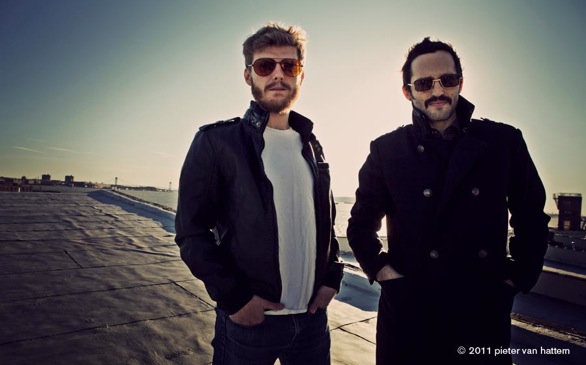 Brooklyn, New York duo Hawk and Dove (singer Elijah Miller and guitarist John Kleber) are the yin and yang of indie rock. The twosome’s debut, This Yesterday Will Never End, is threaded through by cathartic, poetic lyrics and contrasting music that veers from My Bloody Valentine-esque intensity to Mumford and Sons-like acoustics. Miller often evokes Conor Oberst, particularly on pastoral pieces such as quasi-religious “A Song for Him,” which alludes to the Old Testament and name-checks Leonard Cohen. Standouts include the ethereal “The Space Between,” which melds pensive words about promises in the dark with an arrangement that swells to a mini-squall of feed-backed guitar. In hazy “River Girl,” a cryptic tale of a lost young woman,  Miller’s meditative voice spars with shrieking guitar and electric violin. Sometimes Miller’s surreal prose is too self-consciously idiosyncratic (folk-ish “How She Became a Tree” and hearty rocker “Grey Parade” both falter), but overall Hawk and Dove maintain a dense perspective which rises above limitations.