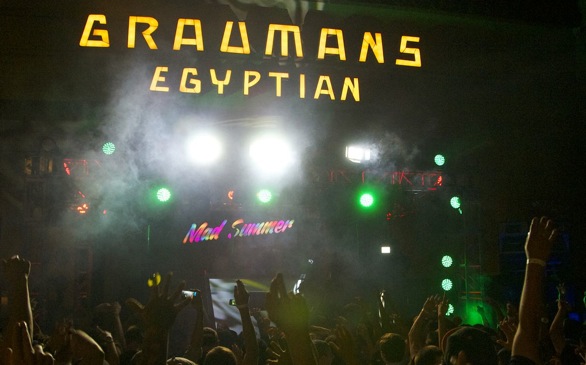 Mad Summer kicked off this past weekend at The Egyptian.
(Credit: Patrick Meissner)

This past Memorial Day weekend, record label Mad Decent kicked off Mad Summer, a monthly concert series featuring DJs performing in the patio area of the Egyptian Theater in Hollywood. Saturday’s show was a buzzing energy of big bass, break-step beats and eager fans teeming to get down and dirty. The event included a headlining set from Datsik with openers Protohype, Shiftee and CRNKN.

Protothype blew into town for the night to lay some music on the crowd before catching a flight to his next gig in New York. In a pre-show interview with Campus Circle, he said he intended to bring some “general hype-ness” to the stage with an energetic blend of dubstep, drum and bass, and trap. For Protohype, this show was a bit of a new scene.

“This is the first time I’ve been affiliated with Mad Decent, so I’m really excited about that,” he said.

Even though he’s new to the label, Protohype put on an energetic show that kept the outdoor venue alive from start to finish.

“This venue is f**king awesome,” he said of the Egyptian Theater’s transformed patio. “The vibes are dope as s**t. They never open up this venue, so it’s super rare. I’m just stoked to be a part of it.”

The Egyptian Theater’s patio is truly a unique venue. Tucked just off of Hollywood Boulevard, hiding in plain sight, the theater was the perfect place for this bass-heavy dance fest that echoed for blocks in every direction.

Next month, Mad Summer will be back at the same venue with dubstep veteran Caspa. Who else will they get on the bill in coming months?