UCLA Students Dig Into the Physics of Food 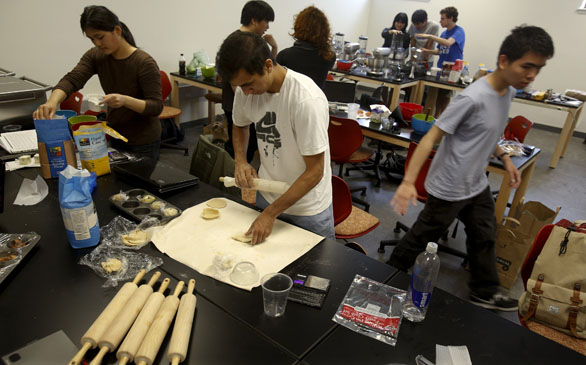 The three undergrads looked warily at the pulverized apples in their bowl.

The would-be pastry chefs had planned to drop dollops of the mixture into a chemical bath, creating fruity spheres with a filmy skin and an oozing interior. Their early attempts left a lot to be desired. The apple mush was bland, like baby food. The finished globules were teardrop-shaped rather than round. And they were chewy, like aging Jell-O.

"It needs sugar," Amirari Diego said, with a sigh.

Diego and his two buddies, Stephen Phan and Kevin Yang, were playing with their food for the sake of science - and their transcripts.

They're students in Physiological Sciences 7 (that would be Science & Food to you and me), a class at UCLA that teaches all about the physics that make lettuce crispy, meat chewy and dough springy; the molecules that make coffee bitter, and carrots sweet.

At the end of the semester, 25 percent of their grade will hinge on what might be the world's first "scientific bake-off" _ a glitzy competition to create an American classic: apple pie.

Before the class is over, students will assess the "structural stability" of their crusts, calculating pastry density using kitchen scales. They'll dip strips of litmus paper into pie fillings to measure pH and gauge whether Granny Smith apples' acidity makes them better or worse in a pie, or how acid affects the way custards congeal in a filling. They'll use math equations that include pi.

"I'm a science major, and this has been really hard," said Neil Brinckerhoff, a human biology and society student. "It's a lot of different concepts in one class."

Professor Amy Rowat, a 37-year-old Canadian biophysicist whose reddish curls and penchant for boots and printed T-shirts make her look like a student herself, co-developed the idea for Science & Food about three years ago, during a teaching stint at Harvard University. Carbohydrates, fats and proteins, Rowat came to realize, were nifty vehicles for explaining a lot of scientific concepts.

"Food is something students can experiment with directly," she said. "They have experience with it."

So Rowat, a self-described "intuitive cook" who had been experimenting in the kitchen since she was a toddler, designed a course that used food to explain physical science. In class, she explained why cooking amounted to "altering the interactions between molecules," and how temperature, acidity, salt content and physical manipulation of ingredients all played a role in making food safe and delicious to eat.

Rowat added the bake-off this year because she wanted to get students thinking about the scientific method: the painstaking process scientists use to understand the world around them.