Soko is Out of this World: Q&A session with the steamy singer. 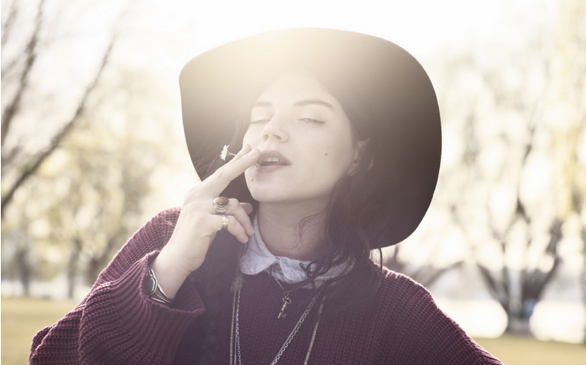 In addition to singing, Soko has also done some acting. She was in the 2012 film,Augustine
(Credit: Majid Moussavi via Facebook.com/soko)

Some might call it an album for the hopeless romantic; others might be drawn by the love songs’ raw realness. Nevertheless, Soko’s new album is sure to captivate audiences.

The singer, musical artist is set to release her new U.S. debut album I Thought I Was An Alien on June 11. With songs relating to that of utter sadness and heartbreak, this album is bound to set your mind in a delicate place. However, count on Soko’s sweet, sensual voice to take the ache away.

Campus Circle: So basically, I know that everyone has been calling you “Soko” – what do your friends call you?
Soko: Soko.

CC: Everyone calls you “Soko” across the board?
S: Yes – my family, my friends, everyone.

CC: Did you just pick up the name randomly? Where did it come from?
S: Well, it’s in my last name. My last name is Sokolinkski, so we are called “Soko” in school, and my dad’s nickname is Soko. My dad died when I was a kid, so I guess I just took on his name.

CC: How do you feel about first loves? When was your first love?
S: My first love was when I was 18. He basically moved in the day that we met. He moved in with me on the first day…he stayed over the day we met, and then he never left.

CC: And from there the relationship was good?
S: Yeah, it was chaotic. It was passionate, like you’re two kids given this great gift of love without the rules of the game, so you will learn to make tough mistakes. That’s how you grow. I wrote this song [“First Love Never Dies”] for him, and we’re still very good friends...

CC: Your new album comes out on June 11. How did you choose the name, and how would you describe the overall sound?
S: I chose the name I Thought I Was An Alien because a lot of the times, I feel as a kid I must have been abucted, and that maybe I was coming from another planet because I had a hard time dealing with reality, understanding this world. I always felt like an outsider to most things…

The sound…I think it’s mostly production. I chose the instrument and the influence and did all the arrangements and everything…There are some songs that are very deep down, and they are straight forward. The lyrics are almost like confessional because what I write, I write for someone, and I write about real things, things that I know and experience. I write because I’m just afraid that I won’t be able to remember what was going on in my life…

CC: What would be your dream band to tour with?
S: The drummer from Violet Femmes, Paul McCartney on the bass, Robert Smith in the band for sure, Morrissey in the band for sure. I can’t think of anyone else but the Cure guitarists because I have been listening to the first Cure record nonstop; it is so punk. Maybe the guy from Television playing guitar.

CC: What is an average day in the life like for you?
S: Oh my God…I’m seriously lacking routine. Every day is different; not one day is like another. Ideally [my day would be] waking up, going on a hike or going to the beach, getting fresh, [drinking] healthy smoothies, seeing my friends, playing music, going to the movies at night or going to a show, writing poetry and sleeping in my girlfriend’s arms. That’s good.

CC: Regarding the "We Might Be Dead By Tomorrow" video, what was the inspiration behind it?
S: The video was with my girl friend - not girlfriend. We had a little thing. She was not my girlfriend – well, I just think she is so beautiful and I just wanted to f*** her, and it was so unlike me. Her energy is very alive, and I was trying to bring that to the story and share little details and memories…[I] really was trying to capture it and put it in a cage and be able to remember it forever…

Soko’s new album I Thought I Was An Alien comes out on June 11.