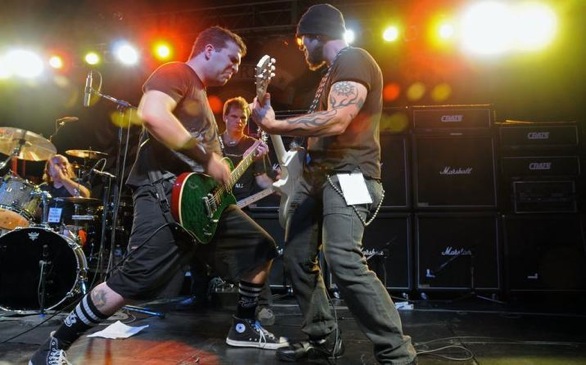 THE STICK PEOPLE ARE COMING!
They’ve put out a couple of singles over the past five years, but now the long-awaited debut album from the Stick People is finally ready to drop. The Los Angeles-based band features singer Stephen Duffy, former Queensryche guitarist Mike Stone and ex-Ozzy Osbourne drummer Frankie Anthony, and they play fast-paced, guitar-driven rock that has a bit of a punk overtone. The album is called Madness, and it drops on June 25; summer tour dates will be announced soon at www.thestickpeople.com

MADLIFE: 21st CENTURY MEGALOMANIAC
Things are really starting to pop for L.A. band Madlife now that their new release 21st Century Megalomaniac has been turned loose; the guys have recently been featured in a live segment on Sirius Radio’s Playboy channel, their free show at the Viper Room blasted the roof off, and new single “Just One Gun” is tracking on the Active Radio chart just like previous single “To Live and Die in Hollywood” did. The guys are always haunting the Hollywood clubs; find local and national show dates at www.madlifeofficial.com

A TRIBUTE TO THE MUSIC OF JOHNNY CASH FESTIVAL
The Ventura Fairgrounds is the place, and June 15 is the date for the Roadshow Revival’s 2013 edition of their annual Johnny Cash tribute festival. Special guest this year will be Foo Fighters guitarist Chris Shiflett with his band the Dead Peasants. Also scheduled to appear are country legend Junior Brown, rockabilly luminary Robert Gordon, the Blasters, the Americans, Cash’d Out and the Walking Phoenixes. Tickets are available at www.roadshowrevival.com/tickets, and if you put in the promo code RSR2013AFC, you will get a 10 percent discount (offer good through June 14.)

Dungeonesse (Self-titled) (Secretly Canadian) – Jenn Wasner handles the vocals for this duo, working in the eclectic pop genre. She’s getting comparisons to Ciara, but she also occasionally reminds people of Annie Lennox.

Emily Herring Your Mistake (Turquoise Earring) – Herring is one to watch on the Americana scene; here she puts her twangin’ guitar and her honky-tonk singing style to good use on a set of swinging Texas-style alt-country.

Small Black Limits of Desire (Jagjaguwar) – This band has expanded to a four-piece for their sophomore effort, allowing them to channel the sublime side of U2 on songs like “Free at Dawn” and update the Tears For Fears sound on “Canoe.”

Standish Carlyon Deleted Scenes (Felte) – Former members of Australian group Devastations make up this group. Here, they step away from that group’s rock sound for a set of chill-out electronica full of deep grooves and breathy vocals.

Blue-eyed Son Shadows on the Son (Eenie Meenie) – Andrew Heilprin is Blue-eyed Son, and his melancholy pop sounds a bit like what you might get if you mashed up Modest Mouse with early Kinks.

Tommy & the High Pilots Only Human (Redbird) – This Santa Barbara-based quartet plays energetic and upbeat dance-pop, and they’re about to head out on a summer-long tour to showcase this new music.

JUNE 4
Brent Amaker and the Rodeo Year of the Dragon (Fin) – Amaker has a voice so deep it sounds like he borrowed it from God, and it gives an ominous overtone to this set of outré Texas country music.

Quadron Avalanche (Vested in Culture/Epic) – Quadron is the Danish duo (but now living in L.A.) of instrumentalist Robin Hannibal and singer Coco O. They offer up a set of soulful pop that’s headed straight for the charts.