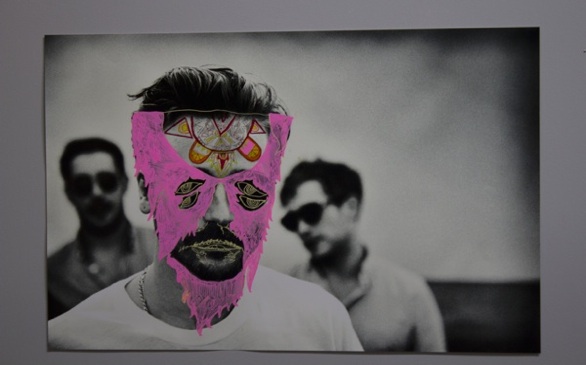 If art and technology weren’t already synonymous with rock ‘n’ roll culture by now, Portugal. The Man made a point of intertwining them before the release of its seventh full-length album.

Evil Friends, which is set to come out Tuesday on Atlantic Records, serves as a fine follow-up to 2011’s In the Mountain in the Cloud as the Portland-based band continues to blur the lines between psychedelic and indie rock under the direction of front man John Gourley.

But Wednesday night’s “All The Feels” installation at LAB ART Los Angeles was as much about Portugal. The Man’s recent journey in the studio — this time with Grammy-winning producer Danger Mouse — as it was about the way art and technology continue to shape the group’s vision.

Bringing its Tumblr account to life in the nation’s largest art gallery dedicated to street art and graffiti, the quintet put on one heck of a listening/cocktail party to celebrate its new record.

With photography by Danger Mouse and artwork from The Fantastic The and INSA acting as the evening’s main spectacle, Portugal. The Man still gave its fans who couldn’t attend the opportunity to hear Evil Friends online while it simultaneously played throughout the exhibit.

For those in L.A. though, the event couldn’t have been a better reminder of the band’s headlining gig July 12 at The Wiltern, just three months after its dazzling sunset performance at Coachella.

Now as a U.S. tour that includes festival stops at Governor’s Ball and Bonnaroo approaches, the real fun is only about to begin for Portugal. The Man.

To view the photo gallery for Portugal. The Man's "All the Feels," click here.