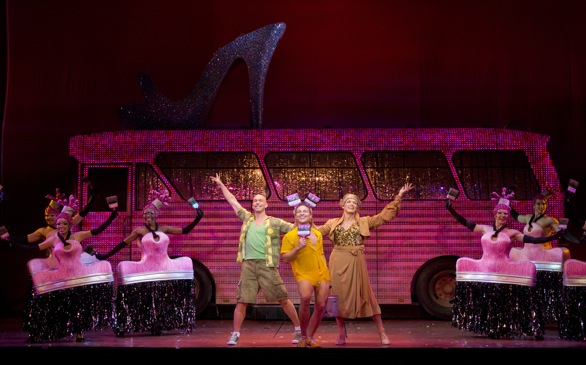 I’ve never seen so much hair, glitter, fake eyelashes and platform heels in the Pantages Theatre. That’s saying something since shiny, ostentatious and altogether unusual sights litter Hollywood Boulevard. Tattoo parlors, oddity shops and the like represent the unofficial motto of Hollywood – every person, no matter their race, sexuality, interests or religion, is welcome here.

So maybe it is appropriate that “Priscilla, Queen of the Desert” is now showing at the Pantages, where the predominantly male cast, who dress their parts in silky, colorful women’s clothing, can feel quite at home.

Based on the Australian feature film, The Adventures of Priscilla, Queen of the Desert that was written and directed by Stephan Elliott and starring Guy Pearce and Hugo Weaving, the musical version is a testament to the film’s fans. The film has found a cult following since it was screened in the Un Certain Regard section of the Cannes Film Festival in 1994.

Tick/Mitzi (Wade McCollum), Adam/Felicia (Bryan West) and Bernadette (Scott Willis) are two drag queens and a recently widowed transsexual woman, who leave Sydney, Australia and the “big city” life that has accepted them. They decide to travel across the country to perform at a casino in Alice Springs, a small town. The trio buys a budget Barbie campervan they dub “Priscilla, Queen of the Desert” and take off into the Australian Outback where a comedy of errors ensues.

Staying true to themselves (and their wardrobe), the three companions perform in dingy bars along their route. Though most of these bars are not as welcoming and tolerant as they hoped, they meet a mechanic named Bob (Joe Hart) who has an empathetic spirit and travels with them as a helping hand in case they have any car trouble.

Eventually, they all make it to Alice Springs where Tick is reunited with his long estranged wife and the 8-year-old son he’s never met. Meanwhile, Bernadette falls in love with Bob.

“Priscilla, Queen of the Desert” relies heavily on its musical numbers. The storyline is thin, and the dialogue consists mainly of sexual innuendo and jokes about homosexuality, which is enjoyable and, at times, hilarious. However, that alone cannot carry a play for the two-hour running time.

Luckily, the musical numbers are fantastic. “It’s Raining Men,” “I Say a Little Prayer,” “Material Girl” and “Like a Virgin” are just a few of the chart-topping hits that are performed in drag-queen style with enormous wigs, colorful outfits and sparkling props.

Above all, “Priscilla, Queen of the Desert” is a story about love, acceptance and making amends that rings truer and more vibrantly than ever before. It’s a spectacle for the eyes and an all-consuming feast for the ears that shouldn’t be missed. That is, unless you don’t like having a good time.

For more information on "Priscilla, Queen of the Desert," click here.

Musical
‘Back to the Future’ musical confirmed for Broadway in 2023
1,176 views

Musical
Summer: The Donna Summer Musical Comes to the Hollywood Pantages from Nov. 5 thru 24!
2,935 views