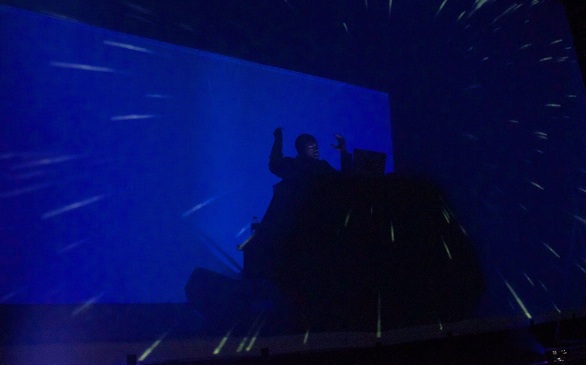 The buzz was palpable at the House of Blues on Saturday night. On the last stop of their most recent tour, L.A. natives Flying Lotus and Thundercat sold out their home show to a crowd of teeming party animals.
The show really didn’t get going until about 11:30 when Thundercat cleared the stage to address the crowd with some new aged funk. The organization and professionalism that this band exudes was a refreshing change from the parade of mediocre DJs that preceded them.

Sporting a serape and metal plated sleeves, Stephen Bruner dug into his falsetto and ripped on his bass to deliver that kind of groovy funk that kids are missing these days. Thundercat, as a band, is on point. It's not just about the mystique of Bruner and his killer bass lines - the drummer is ridiculous, and it happens to be Thundercat’s brother. Ronald Bruner, Jr. gets around his eight-piece DW like a mad octopus. Austin Peralta holds down the sonic fort with dreamy synthesizers. The overall sound is compelling. The show is just one steady trip. No additions, no adieu. Just funk, glorious, new aged, electrified funk. And the people loved it.

However, no one knows how to please a crowd quite like Flying Lotus. The producer/DJ has a collected demeanor on stage. He plays it cool and has fun with the show. What stands out more than anything, even sometimes more than the music, is FlyLo’s charisma. He rides this fine line where sometimes he can be humble and unassuming, and other times, he’s just a complete rock star. He has the type of personality that people are just drawn to, and his fans adore him for that.

At the beginning of his set, FlyLo took the stage in complete silence, and the audience erupted. All he had to do was walk out center stage, and address the crowd with his arms in the air. Without any sort of an introduction, he smiled to himself and said, “alright then.” Then, he calmly walked back to his tables, the lights went dark, and the music started pumping. There was really nothing else to say.

FlyLo’s stage setup consisted of a transparent screen that was erected floor to ceiling right in front of his turntables. The screens projected visuals that were appropriate for Flying Lotus’ bass heavy, 8-bit techno. There was no front lighting, which made the event especially dark. The only times you could see his face was when he came out from behind the screen to freestyle.

Besides being a fun event with a fun MC, the music for Saturday night’s show was cutting edge. Flying Lotus is already known for his trippy styling and attention to bass, but what can sometimes get overlooked is the fact that this he is also a DJ with outstanding taste in music. Thrown in with FlyLo’s original tracks, he also included trap, hip-hop and funk sections. The whole thing was blended together really well, and it sounded great.

With another tour under his belts, Flying Lotus will probably go back to the studio soon to compose yet another selection of tracks aimed at blowing minds. Between all of the attention that we are seeing from him and Thundercat, it’d be wise to keep an eye on Brainfeeder records over the course of the next few years.