Coliseum Deal: USC to Cash in on Turnover 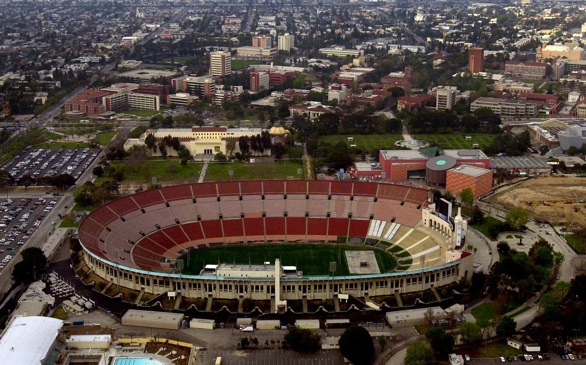 "Some people on the board of trustees of the University of Southern California thought they could bully the Coliseum Commission into giving away the facility to the university for 75 years for nothing," said Yaroslavsky, a longtime member of the stadium panel.

"We were about to give away the naming rights, the parking revenue rights, the concession rights, all those things, to a private university.... I won't stand for it," he told a homeowners group.

Yaroslavsky and the rest of the commission rejected USC's bid then. Now, however, the panel has agreed to give USC everything it wanted — and then some. And they have secured relatively little for the public in return.

The commission has approved a new lease to replace a 25-year agreement that was signed a few months after Yaroslavsky's address. The new document could win final approval next week, when a state board is scheduled to vote on it.

But even some who believe USC would run the venue better than the trouble-plagued Coliseum Commission say the deal shortchanges taxpayers.

The proposed lease "seems to be a huge giveaway to USC," said Victor Matheson, a professor at College of the Holy Cross in Massachusetts and an expert on sports economics.

Commission leaders carved out the new deal largely in secret, saying it was necessary to keep the 90-year-old Coliseum from going bankrupt and falling into disuse. And they did it in a hurry, retreating behind closed doors in the summer of 2011 to set a 75-day timetable for the handoff negotiations, according to commission records obtained by The Times.

Renata Simril, a negotiator for the state, which owns the land beneath the Coliseum and nearby properties, defended the lease package as "a deal that we think is balanced."

Stressing that the commission is on the brink of insolvency, she noted that USC would make the renovations that the current lease assigns to the commission. "The Coliseum Commission cannot fulfill its responsibility," she said.

The agreement grants USC naming rights and other advertising prerogatives, ticket and concession receipts — nearly all of the property's moneymaking assets — without requiring the school to buy the Coliseum complex, which includes the nearby Sports Arena.

It would run for 98 years, granting USC most of the benefits of ownership but leaving taxpayers on the hook if an earthquake levels the stadium or other catastrophe strikes.

In addition to the Coliseum upgrades, USC would pay for maintenance, operations and rent on the state land, but it would stop automatically sharing receipts from its highly successful football ticket sales.

Taxpayers would get a renovated stadium and 5% of the money from naming rights, but no guarantee of further income. And they would lose some of the parking for the free state museums that the public visits on adjacent land.

After 20 years, USC could cancel the lease by giving notice, but the government could end it only by proving that the school violated its terms.

The agreement was an abrupt about-face for the agency, a joint authority of the city, county and state. Long after the existing lease was signed in 2008, commissioners were still speaking of a rosy future for the stadium that has hosted two Summer Olympics and is the former home of the Dodgers and the NFL's Rams, Raiders and Chargers.

The panel planned to sell the naming rights, ramp up concert business and tear down the less stately Sports Arena to make way for a Major League Soccer stadium or amphitheater.

Then a corruption scandal hit. Following a Times investigation, bribery, embezzlement and other charges were lodged against three former Coliseum managers and three people who did business with the venue. Stadium executives were driving luxury cars, having massages and playing in golf tournaments at the public's expense, records and interviews showed.

The revelations also spotlighted perks that the unpaid commissioners enjoyed, such as multiple free passes to USC football games and a luxury suite for Bruce Springsteen concerts and other events at the Sports Arena. Yaroslavsky and Supervisor Mark Ridley-Thomas, another commissioner, used their Coliseum positions to score NFL tickets.

Meanwhile, the red ink was flowing, apparently unknown to the commissioners. Months after the scandal erupted in 2011, then-Commission President David Israel said the Coliseum was not losing money. Later audits found it was millions in the hole and fiscal controls had been weak for years.

The current lease requires the commission, not USC, to pay for the Coliseum renovations. But as the troubles mounted, the panel realized it could not afford the refurbishments. If the commission reneged on the commitment, USC had the choice of leaving the Coliseum or financing the improvements itself and billing the agency with interest.

Under either scenario, the public would have retained stewardship of the Coliseum and its bank accounts. But political considerations were at play.

Yaroslavsky, dean of the commission after nearly two decades, was weighing a bid for mayor. A campaign could have been clouded by the reports of questionable spending and lax oversight. The controversy could also have proved embarrassing to the city and state appointees who, along with Supervisor Don Knabe, rounded out the nine-member panel.

Against that backdrop, the panel decided to get out of the stadium-running business.

In September 2011, Israel proposed in a letter to USC that talks conclude before Christmas. A later document from a private commission meeting proposed giving the public seven days to review the far-reaching deal, which commissioners approved in May 2012.

"The goal was to give it to USC and never look back," said City Councilman Bernard C. Parks, the lone commissioner to oppose the deal. "This has been a footrace to give it away."

A state report in 2005 valued the complex at up to $400 million. Two years later, the commission said the Coliseum alone would have a replacement value of $650 million after upgrades.

Under the pending lease, USC would spend much less than that for the keys to the stadium and Sports Arena: $150 million in capital investments that over the course of the pact would be less than the approximately $1.5 million a year in football receipts the school now pays the government.

USC would also assume operating and maintenance costs, which would depend on how many events the school staged, and annual rent payments to the state of $1 million a year, adjusted for inflation later and eventually reset to market rates.

The agreement grants USC gross receipts from Coliseum ticket, advertising and concession sales, even for non-football events. It would keep 95% of the gross revenue from the stadium naming rights — the state gets 5%. Beyond that, if USC declared a net profit rather than put the money back into the stadium, it would pay the government a share.

Sports industry experts say USC should be able to sell the naming and advertising rights for a combined $4 million to $6 million annually. That revenue alone could more than cover USC's costs for the stadium improvements early in the lease. The school would have to open its books for periodic review by the commission.

Yaroslavsky had told the homeowners' group in 2008 that surrendering income from naming rights to USC would be akin to the commission allowing the school to take "that Picasso that's on your living room wall."

But the commission fumbled its attempts to market the rights, despite interest from potential sponsors — such as Audi. Some commissioners said they couldn't get a good price because of the recession; others contend the panel members lacked the business acumen to nail down a buyer.

A Yaroslavsky spokesman said the supervisor believes "the world has changed significantly" since he opposed a USC takeover. "This is an excellent deal for the community," said the spokesman, Joel Bellman.

USC would be permitted to raze the Sports Arena and replace it with the envisioned soccer stadium or amphitheater. Internal commission documents obtained by The Times show that the school has already had discussions with Major League Soccer about the Sports Arena site.

Robert Stein, a member of the California Science Center board, the agency scheduled to vote on the proposed lease Wednesday, criticized the agreement as "a land grab" but otherwise supports the idea of USC managing the Coliseum. The Science Center is the stadium's landlord.

Stein said the lease proposal robs taxpayers of a greater share of revenue from the Coliseum and a cut of earnings from a prospective soccer stadium.

"What we're essentially doing is giving USC the Coliseum for free and using our revenue streams to pay for its rehabilitation," he said.

Steve Soboroff, a developer who helped bring the space shuttle Endeavour to the Science Center, said the provision that gives USC 70% of museum parking 25 days a year siphons off the institutions' "prime lifeblood."

A key piece of the proposal would have the state extend the agreement from 2054, when the charter of the commission expires, to 2111.

Experts say it is difficult to estimate how much money USC could make from the properties over time.