An Interview with Picture Me Broken's "Angel of Music," Brooklyn 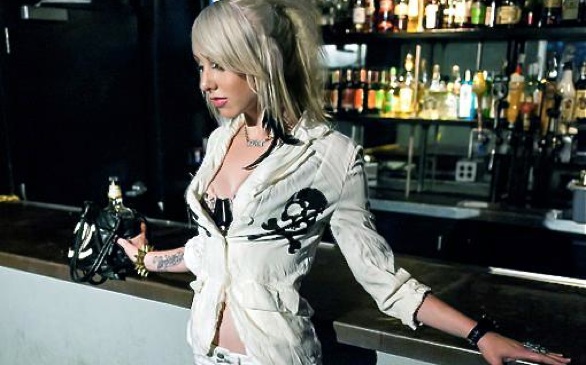 Brooklyn Allman says her love for English and literature fueled songs such as
(Credit: Alan Snodgrass via Facebook.com/picturemebrokenband)

While touring with Alice Cooper and Marilyn Manson, rock ‘n’ roll band Picture Me Broken seeks to inject authentic rock into audiences’ veins like the very legends they’re opening for. Lead singer Layla "Brooklyn" Allman took some time to talk to Campus Circle about the band’s plans to change the game and where it all began.

Campus Circle: So let’s talk Picture Me Broken. Would the girl who started off in this band ever imagine that she’d be touring with greats like Manson and Cooper?
Brooklyn: I think when I started this band at 16, I always envisioned I’d tour with rock idols like Manson and Cooper. When that becomes a reality, there is no better feeling in the world than something that you’ve put your heart and soul into for that many years to turn out the way you originally envisioned it as a child. I definitely feel very lucky that we were able to receive this opportunity; we got here using our own two hands. We don’t have a label throwing money at us. We’re a very DIY band. Doing something at this level and knowing that we (as 20-somethings) did it, is really incredible.

CC: Tell us a bit about the origins of the band? What inspired PMB?
B: I guess it started technically on a playground. I was 12 years old, and there were some pretty talented kids in my class who were jamming. I saw the opportunity to start a band, which was something I really wanted to do. Push came to shove, some members went to college or found other paths. [It] took a while to find the right lineup, and Picture Me Broken is what it is today…

CC: What are the musical inspirations that contributed to the construction of this band?
B: I was always drawn to darker music. Even when I should have been listening to Britney Spears, I was listening to Green Day, Linkin Park and AFI.  And one day, (which is funny cause now I’m touring with Manson) when I was about 7 years old, I picked up a Marilyn Manson album and asked, “Mom, what’s this? I want to buy it.” She was like, “That’s Marilyn Manson - you don’t want to buy that.” (Laughs) I guess I always like theatrical, dark artists, and that was really inspired by AFI and Davey Havok’s cryptic lyrics, his writing. Writing was always my strength, and I always scored high in English class. I guess I kind of nurtured that hobby of mine and tried to make it a career.

CC: From the sounds of it you’re quite an English nerd - any inspiration drawn from literature or any other art mediums, like film?
B: Yes, actually I think my first artistic inspiration had to be “Phantom of the Opera” because I did a lot of plays. And I remember the first time I heard that soundtrack and saw it. I was completely smitten. I enjoyed [Andrew Lloyd] Webber’s melodies and lyrics.  I incorporate that sort of inspiration to my writing today, and we actually sample a little of “Angel of Music” on the song “Mannequins.” A lot of his lyrics guide what I write to create lyrically.

And then another play is “Les Misérables.” Stieg Larsson’s “Girl with the Dragon Tattoo” trilogy and “Girl Interrupted.” I’m kind of drawn to a lot of fictional characters that are kind of like superheroes you could model your image off of - a lot of what you find and are inspired by.

CC: And with your music, what is the message you want to inspire others with?
B: I think today a lot of rock music is swayed by gimmick or some kind of contrived subculture. I’m kind of looking to restore authentic rock music. I would like to be seen the same way front men are seen. I’m trying not to fit in the female-fronted bandbox or any other subculture. A lot of rock music is branched off into a thousand different trends that aren’t timeless. I think it’s important to bring that back to rock or it will continue to be a dying genre.

Picture Me Broken, will be opening up for Alice Cooper and Marilyn Manson at Gibson Amphitheatre on June 6. The new EP, Mannequins, available on iTunes.