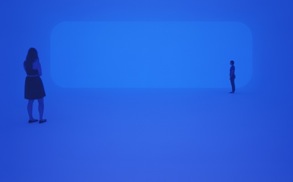 At the Ganzfeld piece, you'll find yourself admiring how Turrell made the wall appear infinite.
(Credit: LACMA)

The newest exhibit at LACMA, James Turrell: A Retrospective, grants a visionary collection of pieces in which the viewer’s own perception and mind become a part of the work. There are no easels or paintbrushes at this exhibit; instead, there’s light. Turrell’s work challenges the way that we perceive and understand the limitations of the illuminating apparition of our world.

In 1943, Turrell was born into a Quaker family in Los Angeles. As an undergrad at Pomona College, Turrell’s fascination with a whimsical understanding of light was ignited. While sitting in his darkened classroom, a projector emitted a lecture onto a screen. Instead of the professor’s rambling, Turrell focused in on the beam of light. Thus spawned Turrell’s career of exploring abnormally alternate ways of perceiving light.

“There is nothing quite like the experience of a Turrell work, which is truly about and for the viewer and his or her perception,” says Christine Y. Kim, the co-curator of the Turrell exhibit at LACMA. “Perception is the medium for Turrell, as his work provokes viewers to see themselves see.”

Throughout the exhibit are numerous hologram pieces, light projections, immersive light installations and an ode to Turrell’s masterpiece, the “Roden Crater” project. Not only does the work defy the way the viewer sees light, but it also tests reality.

“St. Elmo’s Breath” is an immersive installment that transports the viewer into a seemingly alternate dimension. Flatness falls into infinite depth. The piece induces unfathomable compositions of sight making fantasy a reality.

Similarly, the exhibit’s largest and most elaborate work, the “Ganzfeld,” transports the viewer to a strange and serene state of consciousness. Spectators walk into a cavernous light grotto and, due to the seamless ambient light projection, the walls appear infinite. The viewer’s eyes fall endlessly into an impossibly meditative atmosphere.

James Turrell: A Retrospective spans the career of an illustrious light artist. Turrell masterfully reminds us that there is no single way to view the world that we live in. This eye-opening exhibit is not something to be missed. So hurry, before the lights go out.