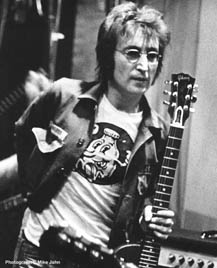 Sporting old-school band T-shirts and rock memorabilia is no longer just for die-hard music fans. It has become trendy and difficult to point out the true music junkies from those who just have a good sense for fashion. Whether or not you fall into either one of these categories, Worn Free, a new vintage T-shirt line, is hoping to teach you a little something about rock and roll history as you strut down the street in style.

It’s not exactly like the world needs another clothing line, but Worn Free shirts are not just your average band T’s – there’s a twist. They’re putting an emphasis on the memorable images, life mottos and philosophies of rock ’n‘ roll legends, and are recreating shirts that the musicians themselves, wore in their heyday. Each shirt comes with an individualized hang tag, that tells the history behind the images and includes a photo of the star wearing the shirt. For example, did you know that in 1971 John Lennon arrived at a New York benefit wearing a "You Are Here" shirt? That particular slogan summed up, his and Yoko Ono’s take on life – meaning seize the moment. It was two years later that Lennon included that slogan on a track of his Mind Games album.

So whether or not you’re down with the rock history, it will be easy to fake it. And when someone questions the meaning behind the Frank Zappa inspired shirt "B’Wana Dik" you can just tell them that it’s the title of a song off the 1971 Zappa and the Mothers album Fillmore East. The song symbolizes how each member of the group secretly believed that he was the B’ Wana Dik (a Swahili word for boss).


Other popular designs include the Working Class Hero, Radio Clyde and Creem Magazine’s iconic Boy Howdy (To find out the meanings and history behind the shirts, you’ll have to purchase them first!). These Worn Free T-shirts not only offer lessons on social history, but give new life to the pop culture and rock ’n‘ roll era of the ’60s and ’70s.