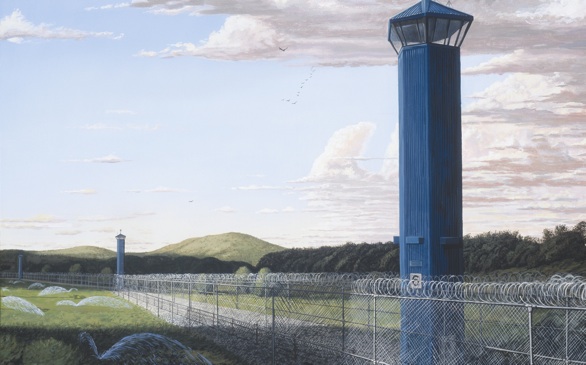 With summer almost here, scores of college kids like you will be left with scant options for activities to fill the time. Most of you will likely frequent a beach—think Zuma or Santa Monica. Others will attend music festivals or watch summer blockbusters. Truthfully, you probably wouldn’t go to an art exhibition.

However, going to an exhibition is a great, hassle-free option to spend a day that would’ve otherwise been withered away doing nothing. With that in mind, here are nine exhibitions opening this summer (or soon after) in or near Los Angeles featuring contemporary art.

1. “Geographies of Detention”
Opening June 1 at 6 p.m.—Sept. 7 (Traveling exhibition leaves Aug. 10)
UC Riverside/California Museum of Photography
3824 Main Street, Riverside 92501
951.827.4787
artsblock.ucr.edu
Photographs taken at some of the largest, most notorious detention centers in the United States will be on display at the University of California, Riverside. This exhibition will feature photos, paintings and films on the same subject. Highlighted artists include painter Sandow Birk, photographer Alyse Emdur and Richard Ross. The gallery will also include a traveling exhibition of the Guantanamo Public Memory Project, which was curated by students and opened in New York in December 2012. Films will be presented throughout the building as visitors receive a detailed view of locations they will hopefully never have to inhabit.

2. “Ancient Future” and “Works on Paper”
June 30—Aug. 17
CB1 Gallery
207 W. 5th Street, Los Angeles 90013
213.806.7889
cb1gallery.com
It doesn’t get much more contemporary than this. Located in downtown Los Angeles’ Art Walk, CB1 gallery was founded in 2010 and features young up-and-coming and mid-career artists of different disciplines. “Ancient Future” is a solo exhibition by Osvaldo Trujillo. Trujillo’s work is in painting and drawing formats, with an abstract quality that also holds some form. Opening alongside “Ancient Future” is “Works on Paper.” This is a group exhibition featuring exactly what the title touts: artwork on paper. From abstract to realist, this is a diverse group of rising artists.

3. “Within the River of Time is My Mind”
June 29 – Sept. 22
MOCA Pacific Design Center
8687 Melrose Ave., Los Angeles 90069
moca.org
Opening in late June at the Museum of Contemporary Art is “Within the River of Time is My Mind” a solo exhibition from painter and street artist Chris Johanson. Through his artwork, Johanson portrays everyday human life with a twist of color and disruption to convey his message. Showing from June until near the end of September, this exhibition is a change of pace from the tone of “Geographies of Detention” – these paintings carry plenty of life in them.

4. “Hearsay of the Soul”
Aug. 13 – Jan.19
The Getty
1200 Getty Center Drive, Los Angeles 90049
310.440.7300
getty.edu
For those who don’t find paintings, drawings and sculptures interesting to look at, here’s an exhibition from an artist who uses film as a medium. From German filmmaker Werner Herzog comes an experience more so than an exhibition at the Getty Center in Los Angeles. A five-channel video projection by Herzog will accompany a score and performance by Dutch cellist and composer Ernst Reijseger. While the music plays, the video will be projected onto artwork done three centuries ago by Dutch artist Hercules Segers, creating a full encompassing exhibition that is both visually and audibly stimulating.

5. “The Universe Next Door”
Oct. 1 – Jan. 5
The Getty
1200 Getty Center Drive, Los Angeles 90049
310.440.7300
getty.edu
Also opening at the Getty is “The Universe Next Door.” Much of what photography encompasses is in the here and now—people use digital over film and techniques are lost—but Abelardo Morell, in his 25 years of activity in the “art world,” has tapped into the past to create modern photographs with an old school aesthetic. Morell will be showcasing a range of work, some of which have never before seen. This exhibition, which was organized by the Art Institute of Chicago with help from the J. Paul Getty Museum and the High Museum of Art in Atlanta, is worth the trip to the Getty.

6. “Bajo el Cielo de Mexico” and “As Far as I Could Get”
LACMA
5905 Wilshire Blvd., Los Angeles 90036
323.857.6000
Sept. 22 – Feb. 2 (Baja el Cielo de Mexico)
Oct. 6 – Feb. 2 (As Far as I Could Get)
lacma.org
A pair of notable exhibitions featuring contemporary art and artists is opening at the Los Angeles Contemporary Museum of Art this fall. The first, opening in September, is “Bajo el Cielo de Mexico.” Taken from the archives of deceased Mexican cinematographer Gabriel Figueroa, these film clips, paintings, photographs, posters and documents showcase Figueroa’s work as well as those who worked with him. “As Far as I Could Get” is a solo exhibition, which features the photographs of John Divola, an alumnus of California State University, Northridge and the University of California, Los Angeles.