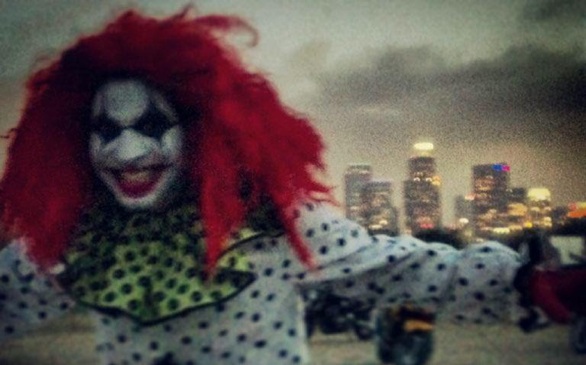 If you’re a horror fanatic who has always wondered whether or not you could survive a slasher flick or feel what it’s like to be a terrorized character in Friday the 13th, then you probably attended the Great Horror Campout last weekend.

Hundreds of thrill seekers got one big, bloody and interactive treat this month when the producers of the Los Angeles Haunted Hayride put on a unique overnight experience that successfully scared the living crap out of its guests.

Located in the Los Angeles Historic State Park outside Chinatown, ticketholders were given one-night accommodations (8 p.m. – 8 a.m.) inside four-person tents. They watched horror movies by a campfire, enjoyed a buffet-style dinner and -- oh yeah -- were stalked by axe-wielding maniacs and other unspeakable horrors in the dark.

"This isn't your 9-year-old son or daughters' camp," they promised. And from the daytime sneak peek I got before Night 2 kicked off, I can see why this event was for those 18 and over.

Included in the package was a "Hell Hunt," during which campers raced against time to find certain objects (“scag items”) to "survive" the night (the winners received golden tickets to this year’s Haunted Hayride).

During my tour of the campgrounds, other journalists and I made our way through an obstacle-filled maze straight out of The Hills Have Eyes: burnt-out cars, an abandoned school bus filled with creepy mannequins, dismembered bodies covered in blood and gooey viscera (I dirtied up my jeans while climbing over a fake dead body) and near-claustrophobic crawlspaces that provided plenty of cardiovascular activity.

Other sections of the campgrounds included a voodoo ritual space, a bushy area that was home to The Mothman (a creature who cocoons his prey in trees) and other spots containing chupacabras, mutant hillbillies, and half-animal-half-human killers (watch out for that goatman – he loves to sniff out his next human meal).

To make matters even more gruesome, during this in-the-dark scavenger hunt, campers were stalked by other “deadly” creatures and were faced with some bloody tasks that make the gory exercises in Saw and Hostel films look like, well, a day in the park. When was the last time you had to cut off someone’s fingers, reach into the stomach of a torture victim for a key and plunge your arms into a large bath of blood for a highly coveted…band-aid?

“The first rule is that we can change the rules – when we want, or any reason we want, and without notice,” said Melissa Carbone, president of Ten Thirty One, the team behind the terror. However, there was one rule that never changed: actors can touch and grab you. They could even put a bag over your head and imprison you in a wire cage for other monsters to have their way with you. In other words, it ain’t for the faint of heart.

But then again, you could always resort to the Great Horror Campout’s safe phrase: “I want my mommy.”

For more information on the Great Horror Campout, click here.