Turnt Up Like a Legend: On the Set of Borgore's Latest Video 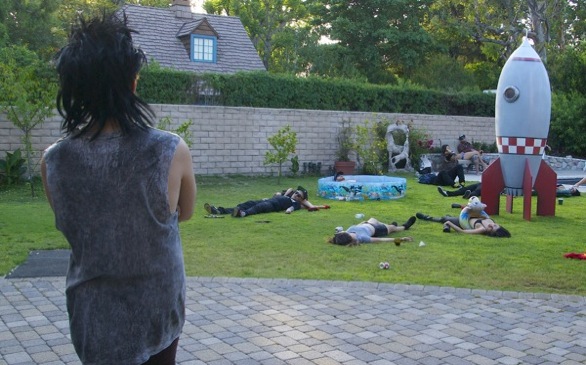 Asaf Borger, or Borgore as you might know him, isn’t worried about too much these days. Smack dab in the middle of a North American tour that has taken him to the Ultra Music Festival and premium venues around the continent, Borgore made a brief stop in Los Angeles last month to work on the video for his next release, “Legend.” Surrounded by a few of his friends, a diligent film crew, a gaggle of go-go dancers and a handful of porn actresses, Borgore seemed right at home in a rented-out North Hollywood backyard that doubled as a film set.

“I have a lot of videos of mine where I’m just doing exactly what I’m singing about in this song,” he said. “The lyrics [in ‘Legend’] are all just about how I’m turning up; just getting ‘turnt.’”

Even though the lyrics of his new track are definitely in line with the rest of his musical catalog, Borgore expressed a certain sense of boredom, or even frustration, with having produced one too many videos that look exactly the same.

“We already have like 15 videos like that, so this time I thought about how we can put a different angle to everything,” he said.

The challenge in this case was to come up with an original video for a song that has the exact same subject matter as every track that Borgore has ever done. Evidently, this challenge was easily met - he had the video’s concept worked out in his head long before “Legend” was even finished.

“When I wrote the lyrics, I had already envisioned the video,” said Borgore.

Apparently, this is not the first time Borgore has thought about the visual and visceral effect of his work when making a composition.

“I like to imagine how things will look visually and how I can incorporate stuff into other things,” he said. “Like, how can I take a song and do something about it in the show? So, let’s say I want to make people do certain things in the crowd while I’m playing a show - I might write a song towards this idea.”

The big idea behind the “Legend” video involves all of the same suggestive visuals as Borgore’s older works, such as a lot of partying and a lot of dancing girls in skimpy clothing. Only this time, this video follows the vague storyline of a little boy, who is trying to become a legend. As Borgore put it: “Basically we have this little kid, and he’s drinking to the floor, except he’s not drinking alcohol; he’s drinking milk.”

Of course, the storyline for this video is slightly more involved than this. The little boy binging on lactose is more of a jumping-off point. Borgore explained that the rest of the concept is still under wraps.

“He wants to be a legend,” he said of the little boy the video portrays. “We tried to think how we can incorporate [that idea] into a video. We came up with this, and the rest will be a surprise.”

Even though Borgore couldn’t say much about his video at the time of our interview, he did comment on how excited he was to be doing something different. If anything, that is the point of this whole project.

“I’m stoked that there is a storyline, and that there is actually a story behind the video,” he said. “It’s not just another video where someone is rapping to a camera. It’s more of a short film…I’m trying to make it more like a piece of art. I want a lot of focus on the video rather than just having the video be in support of the song.”

After watching the video, fans will get their chance to decide whether or not Borgore completed his task of putting together a fresh video that both breaks the mold and holds the viewers’ attention. It’s a hard sell nowadays, but that does not make it impossible.

Now that the “Legend” video is finished, Borgore is looking down the line towards his next set of releases and the evolution of himself as a DJ.

When asked what’s next for him, Borgore gave an excited sigh of anticipation and said, “Working on more music, dude. And I keep working on different stuff. Like this song is not dubstep; it’s more trap. My next release is probably going to be house.”