This Is the End: Seth Rogen brings about star-studded apocalypse 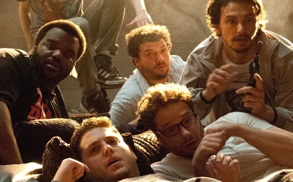 NEW ORLEANS — The music is blaring inside James Franco’s house and there’s booze — and drugs — everywhere. Actor Michael Cera is snorting lines of cocaine, while comedian Aziz Ansari is trying (and failing) to hook up with Rihanna. Dozens of scantily dressed women mill about in Franco’s architecturally sleek crib, which is decorated with artwork made by the actor himself.

If the whole bash wasn’t unfolding on a soundstage in Louisiana, you might be fooled into thinking it was the real Hollywood Hills deal. But Franco’s house and the party in it, like much of the new raunchy / bawdy R-rated comedy This Is the End — in which he and dozens of other celebrities play themselves — is a fictionalized version of the real thing. These stars wouldn’t really behave this obnoxiously, or would they?

Depending on your perspective, This Is the End, opening in theaters Wednesday, is the definitive example of an inside joke run amok or an inspired twist on the buddy comedy. The movie fuses two central conceits together: The first is six lead actors — Franco, Seth Rogen, Jonah Hill, Jay Baruchel, Danny McBride and Craig Robinson — play exaggerated versions of their real selves. The second is a half-dozen clueless narcissists try to survive the apocalypse.

Soon after the movie opens, violent earthquakes rock Franco’s house. While the actor and his guests are too stoned or clueless to worry, it soon becomes clear that the temblors are a precursor to even greater calamity. Huge sinkholes swallow people alive, while blue beams of light suck others into the heavens. Franco’s gathering, in other words, could be the party to end all parties: Judgment Day has arrived.

This Is the End, which Sony Pictures is opening two days ahead of Warner Bros.’ Man of Steel, grew out of the 2007 short film Jay and Seth Versus the Apocalypse, which starred Rogen and Baruchel.

Rogen and longtime collaborator Evan Goldberg (Superbad, Pineapple Express) wanted to turn the 8 1/2 -minute short into a feature for their directorial debut and spent years trying to figure out its third act.

“The apocalypse is like the ultimate end, so we had to think of an end within the end,” Goldberg said. Added Rogen: “Basically we thought, ‘Where does a movie like that go?’”

The answer has something to do with Satan, and his carnal affections for Hill.

Rogen and Goldberg wanted to preserve the short’s key notion of actors cast as themselves.

“We always had the idea that we should have people playing themselves because society really likes it and wants it,” said Rogen, not fully joking. “And then it became exciting because we started to realize that we were approaching this sort of fourth wall reality, a lot like Being John Malkovich.”

Even if the Spike Jonze meta movie was a storytelling influence, This Is the End was really conceived as an antidote to the 2011 film The Green Hornet, which Rogen starred in and co-wrote with Goldberg.

Produced for about $120 million, the movie was a commercial and critical washout. (The Green Hornet may not be the most tedious superhero movie ever — the competition is admittedly tough — but it is certainly in the running,” the Los Angeles Times review said.)

The experience left the duo wanting the kind of creative freedom that comes with a less expensive film.

“It took three times as long as another movie would have taken, and was way less fun to make,” Goldberg said of Green Hornet. “All we talked about is, ‘If we had half the money and it was rated R, it would have been so much more fun.’”

Added Rogen: “Mo’ money, mo’ problems. We wanted to be able to do whatever we wanted content-wise, we wanted to be able to push limits without having to worry about whether we would be able to turn a profit and that kind of stuff. A movie like Green Hornet, we are contractually obligated to deliver a PG-13 movie. So it doesn’t matter how funny the R-rated jokes are, you can’t do it.”

Even with a proposed price tag of $45 million, This Is the End initially received a frosty reception.

“We thought we’d come up with the golden ticket, that there was going to be a bidding war, that three of the studios were going to go crazy,” Goldberg said. “But some of them never called us back.” Sony expressed the only real interest, but only if the filmmakers were willing to slash the budget by a third.

To get as many celebrities as possible into the film, the production initially was going to shoot the party scene in Los Angeles. But even when the production relocated to New Orleans, about the only prominent name This Is the End lost was Cameron Diaz. Paul Rudd flew to Louisiana for one night of filming, and came home the next morning.

“We really did get everyone we wanted,” producer James Weaver said.

To procure about 600 visual effects shots on the cheap — the budget for the apocalyptic effects was just over $3 million — the filmmakers turned to the upstart company Modus in Montreal, which like Rogen and Goldberg wanted to prove it could deliver the goods at a fraction of the usual rates.

The script may have read well enough on paper, and scenes played funny on the New Orleans set. But there was still the risk that audiences would find This Is the End desperately self-absorbed.

“Our first concern was: Is playing ourselves like a massive failure on all fronts?” Rogen said. “Which is like a horrifying thought that kept coming up over and over as we were making the movie. I’ve actually never been more nervous before a preview than for this one, because it could be complete concept rejection. And it would just be catastrophic for the movie. And we couldn’t go around it.”

It turned out not be catastrophic, as the film went over well with test audiences. Still, the box-office prospects are vague. Audience tracking surveys suggest the movie could gross as little as $15 million and as much as $32 million in its first five days of release. Early reviews have been largely favorable, some even glowing.

Even though This Is the End has yet to open, Goldberg and Rogen have several similarly budgeted movies in production and development with their producing partner Weaver and their company Point Grey Pictures.

“Townies,” which recently wrapped filming in Los Angeles, is a Universal Pictures frat house comedy starring Rogen opposite Zac Efron and Rose Byrne. Rogen and Franco will next star in Sony’s The Interview, which Rogen and Goldberg will direct, a comedy about two journalists caught up in a North Korean assassination plot. They are hopeful that their long-in-the-works Sausage Party, an R-rated animated comedy about the secret lives of food, could soon start production.

“I feel like we’ve really hit our stride. I feel like we’ve been smart about the movies we’re doing,” Rogen said. “I think we made a lot of mistakes in the past, honestly, that have taught us not to do those things anymore. We’ve made movies for budgets that we shouldn’t have been making them for and for ratings we shouldn’t have been making them with.”

“They said, ‘You guys have to keep pushing it. We don’t know how you’re going to do it, but keep pushing it,’” Goldberg said. “Every movie has something they’re terrified by. And I think they’re beginning to realize that they like that.”

This Is the End opens in theaters on Wednesday, June 12. For more information on the film, click here.