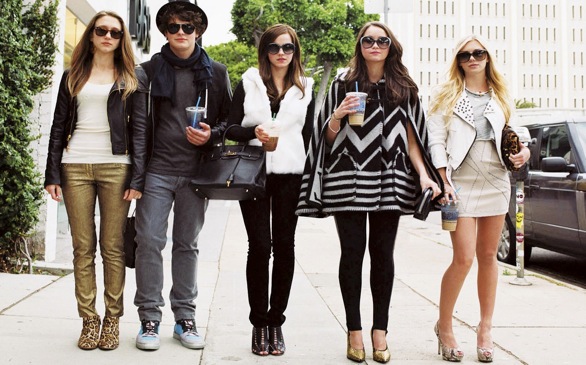 Behind all the glitz and glamour, the red carpets, the preconceived notions of self-importance and all other fame-induced psychological defects, actors and actresses are construction workers.

They take themes, lines and ideas from directors and either create something magnificent, or they completely demolish a movie idea that someone “had in their head” for years. That’s what actors do.

Luckily for directors, actors—more times than not—help create, which is what director Sofia Coppola’s main cast of teenagers and 20-somethings did for her in her latest film The Bling Ring.

The film is about the true account of a string of burglaries committed by a bunch of Calabasas teenagers whose choice of prey was the rich and famous: Paris Hilton, Orlando Bloom, Lindsay Lohan and more.

At the white paint-clad Beverly Hilton, four of the cast members—Israel Broussard, Katie Chang, Taissa Farmiga, Claire Julien—sat at one side of a round table. After a series of television interviews, it was now time for the print media to get their turn with the young talent. Each reporter was allotted 10 minutes, down from the previously promised 15 minutes. However, 10 minutes was all one needed to realize that these four are nothing like their pseudo-psychopathic real-world counterparts.

“I found it kind of difficult right at the beginning,” said Chang, who plays the ringleader Rebecca (also known as real-life Bling Ring leader, Rachel Lee), “because my character is, I hope, a lot different than I am.”

“She is!” one of the other cast members said in agreement.

It seemed like pretending to be people with serious mental and social issues who decided to steal from celebrities was the most difficult part about creating this film. But liking each other may not have been a problem at all. Throughout the interview, it stopped feeling like a professional interview and started to feel like being in the presence of four friends who have known each other for years. And that made work easier and a lot more fun for them.

“We did create such a special bond, that if I ever felt like I was having trouble with the character, I knew I could just look to one of them and start working off of what they were doing,” said Chang.

The interview took on a life of its own and transitioned from topic to topic, person to person without any need for guidance. Preparation for their characters became a topic.

“What’s interesting is like, when you’re preparing for it, you’re mostly about your character. But in your head, you have ideas for the other characters,” said Farmiga. “And then I meet [my fellow cast members], and everyone brings something different, but very special to the table.”

Farmiga was by all accounts the most experienced actress of the group—she’s been the lead in “American Horror Story” for the past two years. The rest of this group is full of relative newcomers, receiving their first chance to break into Hollywood in a way their characters might appreciate.

“One of my favorite things was we did a table read,” said Farmiga, “and Sofia mentioned she hadn’t done the table read in a while because usually her scripts are so bare. But it was really cool to go in and hear everybody’s different perspective…I was especially surprised by Claire [Julien] because when I read the script I pictured Chloe being this really, I don’t know, not as badass as [Claire Julien] made her from the get go.”

A little over halfway through the interview, the conversation circled back to the roles and Emma Watson, the biggest star in the movie who was absent from the day but not absent from mind.

“It’s like a collaboration,” said Julien. “We all worked together to kind of figure out our own characters’ stories and how we fit together as a group because the whole story is not about each individual one. Emma [Watson] is the star, but she’s not the star…She’s the most famous one, but she’s not the focus of the film nor is even Katie, who’s the lead. None of us really are pinpointed; we all worked together to form this infamous band that wouldn’t have worked separately.”

From there, the group proved that in addition to be actors, they are also vibrant, funny, young adults who were (understandably) more concerned with having a good time than holding a random press day interview.

“She’s the life of the cast and crew,” Broussard said of Farmiga.

“You’re the veins and the heart."

“No I think she’s the stomach!” said Chang.

“I’m for sure the brains,” said Julien. “I’m just going to claim that right now.”

“Are you the limbs that do the movement?” Farmiga asked Chang.

“I don’t know what I am,” she responded.

“You can be the joints.”