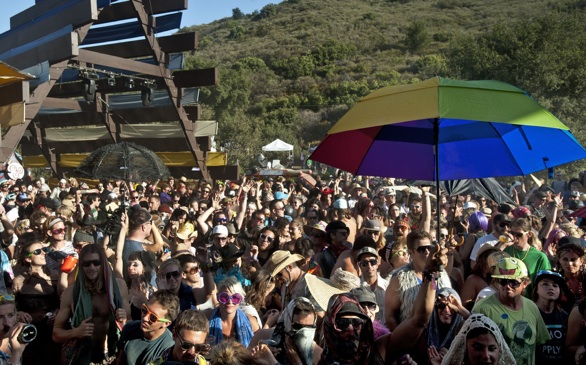 Those returning to Lightning in a Bottle this summer should be ready to experience some big changes from years past.

The Do LaB’s famed sustainability music festival not only has a new home, but it’s also taking place during a different calendar season.

After previously being held over Memorial Day weekend, the event’s eighth edition will take Riverside County by storm July 11-15.

Despite new zoning restrictions that have forced Oak Canyon Ranch to discontinue hosting large-scale music festivals, the scenery won’t be all that different from what it was. LIB, in fact, will still be positioned next to a body of water as Temecula’s Lake Skinner County Park welcomes the four-day festival to its grounds for the first time.

“Any time you jump ship, it’s hard,” said Dede Flemming, a co-founder of The Do LaB alongside his older brothers Jesse and Josh, in an interview with Campus Circle at last year’s event.

“It’s a lot of work to build a little city for a weekend … but I think our ultimate goal is to have a piece of land that can be utilized more throughout the year.”

One of those occasions could be for more Do LaB events like Rise and Shine, a primarily yoga festival in Simi Valley that was canceled last fall after production costs grew too high and not enough tickets were sold.

“With art, you always want to make changes and to strive to do something bigger and better,” explained Flemming. “We look at a venue as kind of a palate and what we can do with it.”

But with views of Lake Skinner from the adjacent peninsula, LIB’s new location will provide more than just a beautiful backdrop. The Do LaB believes the site will offer festivalgoers a more comfortable camping experience thanks to additional accommodations like full RV hook-ups, and it thinks the smaller park will also be easier to navigate. To beat the mid-summer heat, it plans to have daytime water areas similar to its Oasis stage at Coachella.

Music, of course, will only be a part of the experience for many. While some of the industry’s hottest electronic artists have headlined in the past, LIB remains largely a convention for yogis, artists and speakers. Yoga, live paintings and workshops on sustainability, for instance, are just as integral to the festival as the music it fosters.

“We’re really trying to bring the lifestyle element into the festival more,” said Flemming. “We don’t want people to just come for the music. We want them to come for everything else.”

For that very reason, The Do LaB tries to wait as long as possible to release a lineup in an effort to push the festival’s other elements first. This year’s lineup came two months after The Do LaB announced it would be changing LIB’s dates and location.

Still, it’s indisputable that the Flemming brothers have continued to book bigger and better acts, especially after recently landing EDM giants such as Bassnectar and Pretty Lights. And the headliners haven’t been the only ones worth seeing, either.

“We want to showcase as many different genres of music and expose people to the great music that’s out there,” added Flemming. “It’s not necessarily about the headliners. That’s not the goal.”

This year’s bill features a plethora of talented producers to go along with the LIB debuts of Nicolas Jaar, Rusko, Tycho and GRiZ. It will also mark the return of Emancipator, Paper Diamond, Lee Burridge and Eskmo, who all performed at the festival in 2011.

It may just be why The Do LaB has expanded LIB’s capacity from 10,000 to 15,000 participants after seeing tickets sell out the past three years.

“When it started, it really wasn’t meant to be a music festival,” admitted Flemming. “We learned that we can’t just build it and they will come.”

Now, what started as a birthday party amongst friends more than a decade ago has grown into The Do LaB’s marquee event, centering on the ideals of community and self-exploration.

“We don’t just want people to come here and party,” said Flemming. “We want to inspire change in people and with the way they treat people. The party is just the bonus for coming and celebrating life.”