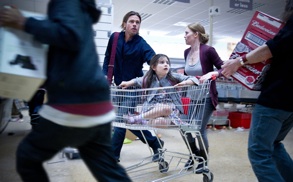 ORLANDO, Fla. — For much of its production life, director Marc Forster’s film of World War Z has had another z-sound hanging over it — buzz. Bad buzz. Delayed, pulled from the release schedule last fall for reshoots, the Brad Pitt zombie movie has been branded with the phrase “troubled production.”

All part of the plan, Forster jokes: “Sometimes, it’s not a bad thing for people to walk in with low expectations.”

Indeed. Among the summer blockbusters, World War Z might have zombie movie fanatics in a tizzy, eagerly awaiting the adaptation of Max Brooks’ best-selling novel about a worldwide zombie contagion. But the rest of film fandom? Distracted by Iron Man, Star Trek and the Man of Steel.

The earliest notices — reviews from the UK — further dampened expectations.

“A more apt title would be World War Zzzzz” a wag wisecracked for the website This is London.

But waves of other reviews soon drowned out the naysayers. And Forster, the German-Swiss filmmaker who directed Monster’s Ball, Quantum of Solace and Stranger than Fiction, can breathe a little easier now.

“We changed the ending,” he says of the release delay. “The original ending was like a lot of blockbusters, a big fight with lots of explosions — a final battle.

“I said, ‘Look, I think we’ve already had a big battle. It would work much better with something quieter.’ The Israel story beat, the movie’s battle set there, was so big that I didn’t want to try and top it. I wanted something more like a haunted house type of storytelling ending. So we went for something very different, more intense, I think. I think that will set us apart among the big summer movies.”

Forster isn’t shy about tackling genre pictures or potential blockbusters. But the director of Machine Gun Preacher searches for projects with a message.

“World War Z has a lot to say on a socio-political level. The geopolitical backdrop gives it substance. It’s more academic than your typical end-of-the-world horror film.

“Zombies have always been a great metaphor for other things — trends in society, outcasts. And when they show up, the rest of us have to put aside our differences, don’t we?”

Ever since George A. Romero (Night of the Living Dead) invented the genre, zombie movies present storytellers with a set of problems. What barriers can protect us from zombies? Walls? Moats? Concertina wire? How fast do they move? What limitations of theirs can be exploited? As many critics are noticing, World War Z is “surprisingly smart” and “imaginative” (Variety) in dealing with those.

“As a kid, we had a landfill behind our house,” Forster, 43, recalls. “I loved watching the ants crawling all over each other to be able to climb up over something to get at something else. That image stuck with me, and when I signed up to do this movie, I realized this would be the one place I have the chance to use that image, to translate it to cinema. Zombies, piling up against a wall so that others can climb over that to clear the wall.”

He’s selling World War Z as a “family story” whose backdrop is “this epic, end-of-the-world tale.” Because Forster is fully aware of that one last z-word that films such as “This is The End,” “World War Z,” “Rapture Palooza” and The World’s End tap into — the zeitgeist.

“We’re living in a time where there is a lot of fear out there — failing economies, job uncertainties, terrorists, an environmental future that seems very uncertain. The movies are reflecting that. We’re fictionalizing everybody’s anxieties with zombies, and these other catastrophes on film. We turn that fear into entertainment.”