World War Z: Brad Pitt Travels the World to Save the World 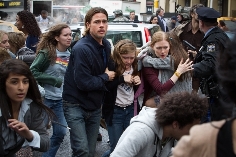 Zombies are trendy right now. AMC’s “The Walking Dead” is receiving record ratings for a cable show and outperforms many network shows while every few months, a new zombie movie invades multiplexes. From what is considered to be the first zombie movie ever made – 1932’s White Zombie starring Bela Lugosi to George Romero’s 1968 classic, Night of the Living Dead, to the more recent adrenaline-infused zombie flicks like the excellent Dawn of the Dead remake and 28 Days Later – zombie movies are popular because they tap into the deepest fears of our psyche as all good horror movies do. What if you were being stalked by a homicidal maniac? What if your house was haunted? What if people around you were turning into undead cannibals?

Now take those fears and add them to the even scarier, and much more plausible scenario of a deadly global pandemic. In the 1300’s, the Bubonic Plague (aka the Black Death) killed one third of the world’s population. More recently, the 1918 Spanish flu pandemic might have infected up to 500 million people globally. Every so often, the Centers for Disease Control or the World Health Organization issues a press release on the latest global health threat from Ebola to SARS to H1N1 (which is a version of the 1918 Spanish flu virus). We’ve all been sick before, but what if millions of people around you were actually dying of an incurable disease? Movies like The Andromeda Strain, Outbreak and Contagion have effectively realized these fears on the big screen.

Brad Pitt’s latest big budget blockbuster hopeful has earned the inevitable comparisons to the aforementioned films since it’s a mix of the zombie movie and epidemic movie genres and that’s not necessarily a bad thing. What could be scarier that a global pandemic of zombies? As I was able to think about World War Z after watching it, I, of course, thought of the movies I previously mentioned, but the first movie that I immediately compared it most to, mostly, was Aliens. Replace Sigourney Weaver with Brad Pitt and it’s actually a similar movie. And, again, that’s not necessarily a bad thing. In Aliens, Sigourney Weaver is a civilian traveling to another planet with military personnel to destroy an alien that seems to have no weakness. In World War Z, Brad Pitt plays Gerry Lane, who is a civilian traveling around the planet with military personnel to destroy a virus that seems to have no weakness. Believe me, anyone who knows my taste in movies knows that Aliens is one of my favorite movies ever, so it’s definitely not faint praise for me to compare a movie to Aliens.

Both movies are probably, and unfairly, categorized as horror/sci-fi movies when both are actually straight-up suspense thrillers in my opinion. You’re thrust into the action right away and one action sequence organically leads to the next action sequence. No action, or any of the PG-13 violence for that matter, seems forced or gratuitous. Most movies nowadays seem to be like 20-30 minutes too long, as if they keep the deleted scenes that are kept for the DVD in the movie itself. In fact, World War Z – and I highly doubt that I will say this many more times in my life – could’ve actually been 20-30 minutes longer and it still would have felt like the roller coaster that it is without as many unanswered questions. I don’t like to give away too many plot points, but there are certain plot points – the Hispanic boy who joins Lane’s family, the possible Patient Zero in South Korea, the supposedly knowledgeable refugees in Jerusalem – that could have been fleshed out more without dragging the movie down. Who knows, maybe some of these questions will be answered in the possible/inevitable sequel. World War Z is the first movie in a rumored trilogy.

World War Z probably doesn’t have any Oscar aspirations, but that’s okay. Some of the tastiest dishes aren’t 5-star cuisine. Mix together some Dawn of the Dead/28 Days Later (the zombies in World War Z move fast like the zombies in those films) with some Outbreak/Contagion and add a generous helping of Aliens and you’ve got yourself a tasty World War Z casserole. As an escapist summer popcorn movie, you can’t get much better this year. Just fasten your seatbelt and enjoy the ride.