UCLA is Built to Thrive in College World Series’ Park 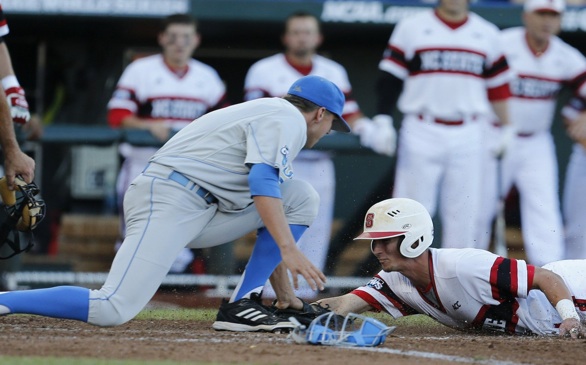 One thing you can say about UCLA’s baseball team: The Bruins have been considerate of other people’s feelings.

Nobody walks away feeling too bad.

You’d almost expect guys to start picking up the dinner tab for the Bruins after losing to them.

The Bruins have scored four runs in two College World Series games. They are one for 19 with runners in scoring position.

UCLA’s team batting average is closer to USC’s area code (213) than Westwood’s (310). Yet the Bruins have not just survived, they have flourished despite a .249 average. They play North Carolina today. A win sends UCLA to a best-of-three series to decide the national champion. A loss creates a rematch on Saturday.

The reasons the Bruins have been so good so far are simple: pitching, defense and a ballpark that allows for fewer home runs.

UCLA is built to play in Omaha’s TD Ameritrade Park. The Bruins’ pitching and speed play better than brute strength in Omaha these days.

Savage acknowledged Tuesday, “It’s tough to watch, I’m sure,” but added, “from outside the dugout.”

Beauty is in the eye of the beholder. The Bruins have won eight games scoring two or fewer runs and have a 17-2 record in one-run games.

So 2-1 victories over LSU and North Carolina State this week were business as usual. Starting pitchers Adam Plutko and Nick Vander Tuig were effective and were allowed to get away with the occasional mistake.

The ballpark “favors us a little in terms of how spacious it is,” Savage said. “We had a couple of fly-ball pitchers who could pound the strike zone.”

And not be pounded.

Plutko and Vander Tuig were safe from the shots so common at Rosenblatt Stadium, which was home to the World Series before it moved to the new park in 2011.

The blueprint for TD Ameritrade Park was drawn up for a different game, where football-like scores were all too common. The NCAA toned down the bats in 2011, taking the touchdowns out of TD Ameritrade.

The dimensions of the two ballparks are the same, but the wind often blows in at TD Ameritrade. Combined with the new bat regulations, popups come down in play rather than in the seats.

There were 32 home runs in 2010, the last year the World Series was at Rosenblatt. Only 22 have been hit at TD Ameritrade in three seasons. Teams have three this season.

There have been five shutouts since the new park opened. The last shutout in Rosenblatt was 2006.

After LSU lost to UCLA, Mainieri said that three fly-ball outs by the Tigers “in our ballpark would have been home runs.”

Oregon State’s Danny Hayes lost a potential three-run home run that would have beaten Mississippi State when his ninth-inning drive was caught at the right-field fence. North Carolina State’s Trea Turner crushed a pitch with two on in the eighth against UCLA. He left the batter’s box with fist raised, then saw the ball caught at the wall.

Asked after the game if he thought it was a home run, Turner said, “Yeah, I was dumb enough to.”

Savage has always been a pitching-first recruiter, and that’s the foundation for the Bruins’ success. He has altered his recruiting philosophy on position players to fit the toned-down bats.

“It’s kind of a formula, but I think we’re in a position where we’re starting to figure it out,” Savage said. “You need some physical-ness, you need size on the field. If you’re not that type of player, you need to run.”

The Bruins’ speed plays well in TD Ameritrade. The ballpark prevented Turner’s ball from being a home run. But it was left fielder Christoph Bono who kept it from being a two-run double by making a running catch on the warning track.

UCLA “works well in Omaha in the sense we can pitch and we can play defense,” Savage said. “There are not a whole lot of fly balls leaving the ballpark.”