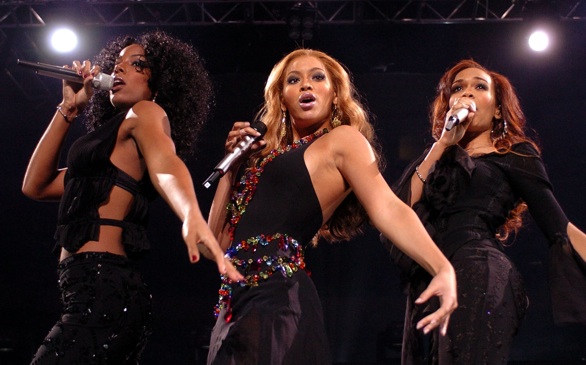 DESTINY’S CHILD VIDEO ANTHOLOGY
Legacy Records has released a 16-track, career-spanning collection of videos from Destiny’s Child. Included are “Soldier” with T.I. and Lil Wayne, “Say My Name,” “Bootylicious” and a second mix of the video featuring Missy Elliott, “Jumpin’ Jumpin’,” “Bills, Bills, Bills,” two takes of “No, No, No” including the Wyclef Jean version and the H-town Screwed Mix of “Bug a Boo.” The collection spans the era 1998-2004 and is the first-ever career video retrospective for Beyonce, Michelle and Kelly.

FREE BULLET TOOTH SUMMER SAMPLER
The Bullet Tooth label wants to make sure you have a rockin’ summer so they’re offering a free download of a 10-song sampler featuring their artists. Contributing a track each to the freebie are Affiance, Death Ray Vision, NightShade, Throw the Fight, Deception of a Ghost, the Smoking Hearts, I, Omega, Serianna, Memphis May Fire and the Paramedic. Grab your copy at www.bullettooth.com/download

WOODY GUTHRIE AT 100! LIVE AT THE KENNEDY CENTER
A new film celebrates the centennial birth anniversary of America’s greatest folk singer, Woody Guthrie. Woody Guthrie at 100! features performances by Tom Morello, Old Crow Medicine Show, Sweet Honey in the Rock, Donovan, John Mellencamp, Ani DiFranco, Lucinda Williams, Jeff Daniels, Ramblin’ Jack Elliot, Roseanne Cash, the Del McCoury Band and many others. The show, available now on DVD, closes with all performers joining in for a rendition of Woody’s most famous song, “This Land is Your Land.”

SUBSOUL COMPILATION
The SubSoul label, specialists in “the soulful side of bass music,” has just released a various artist’s compilation of deep house, garage and bass music. Among those contributing to the 24-song set are Toyboy & Robin, Artful Dodger, Gorgon City, Huxley, Justin Martin, Breach and Kidnap Kid. For a complete track listing visit www.subsoul.com

TWO BOOKS FOR METAL FANS
Metal fans who like to read have two books to dig into this month: Louder Than Hell by Jon Wiederhorn and Katherine Turman and The Merciless Book of Metal Lists by Howie Abrams and Sacha Jenkins. Louder than Hell is a giant tome subtitled The Definitive Oral History of Metal. It consists of many brief commentary pieces from a who’s who of the genre including Geezer Butler of Black Sabbath, Rob Halford of Judas Priest, Lars Ulrich of Metallica and countless other big shots of metal and lesser-known personalities too, like Necrobutcher and groupie “Sweet Connie” Hamzy. The Merciless Book of Metal Lists is exactly that – a thorough compilation of lists featuring best of and worst of categories, tallying up the greatest, the biggest, the craziest and almost everything else you can think of. There’s humor too, even if it is a little bit mean at times, like the column about Lemmy Kilmister’s (Motorhead) warts. Both titles are widely available now.

HALF NOTES
Joan Jett has been named as this year’s honoree for the Sunset Strip Music Festival and August 1 will be Joan Jett Day in Hollywood. The SSMF takes place August 1-3 at various venues on or adjacent to the Sunset Strip; band line-ups have not yet been announced.

Pepper has a new self-titled album dropping on July 16; their latest single “FKARND” is available now.

L.A. psych-rock band Dreamers Dose has a new single out called “Pray for Me, Fragile;” look for their full-length debut At Least We’re Happy later this summer.

Vertical XL is the fifth E.P. from L.A.-based DJ Kingdom; songs on the new offering are inspired by Kingdom’s first years in Los Angeles.