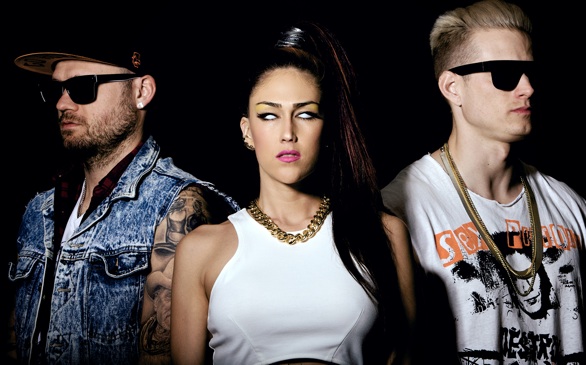 According to its Facebook page, this band enjoys making fun of itself.
(Credit: Courtesy of MSOPR)

Back in the glory days of MySpace, Los Angeles-based trio Hyper Crush was releasing electro-rap bangers that sent electricity coursing through the veins of head-bobbing listeners. Since its humble beginnings, the group has expanded its following from the Internet to the clubs of L.A., Japan and Europe.

Today, the dynamic trinity is still grinding with a highly anticipated new album, dubbed Vertigo, due later this summer.

“There will be something on there for everyone,” said Holly Valentine, Hyper Crush’s swaggered siren.

Vertigo, which started as just an EP, will showcase an eclectic array of the genres in which the group dabbles. “There’s a song on there that’s just me. It’s a little slower. I feel like it will be the girl jam but still pretty dope. Then there’s the really hard, aggressive song.”

The first single off the album premiered on VIBE.com in late May. “Visions of Coleco” was unleashed with a video that’s locked and loaded with firearms, hooded falcons and a black panther. And that’s just the visuals. The song is a typical Hyper Crush hit, full of electro-laser trap beats and emphatic verses from Valentine and lead rapper, Donny Fontaine. The video dropped in cahoots with a remix of the single, featuring a verse from polished southern rap powerhouse, Riff Raff.

Alongside Hyper Crush’s vocalists, Valentine and Fontaine (not to mention big-time special guests like aforementioned Riff Raff), is Preston Maronie, the beat producer and integral part of the group’s explosive sound. Maronie, Valentine and Fontaine have been together since Hyper Crush’s inception in 2006 and rode the highs and lows through an uncanny route to signing with a major label.

“We were doing residency shows every weekend,” said Maronie. “That was kind of cool, but I don’t think that was the catalyst for us to get signed.” What did blast them into the eye of the public and the industry was a cult following on MySpace.

The group became Internet-famous for remixing original pop and rap songs like La Roux’s “Bulletproof” and Drake’s “Over” (which was featured on Project X’s soundtrack). “That was the initial thing that got it going,” recalled Maronie about the remixes.

Since then, Hyper Crush fell into its own progressive and experimental musical identity, combining various genres including rap, electro, trap, pop, house and many more. Fontaine proverbially calls their musical prowess “a mess.”

Aside from musical talent, Fontaine characteristically describes the group’s style bluntly: “we’re swanky.” This unique amalgam of sound and swagger garnered a deal with the Motown/Universal music label. However, the group still craved more.

In February 2012, Hyper Crush broke their ties with Motown/Universal and created their own label, under which they released their own album. Night Wave, Hyper Crush’s second full-length album, with 11 songs and four hits, was released under newly founded and internally operated Night Wave Records.

Night Wave debuted at No. 2 on iTunes’ electronic chart, right behind dub step-dynamo, Skrillex. It sold more than 10,000 copies. Despite cutting out a major label middleman and the album’s significant success, Fontaine says that all this brought in “not a damn thing. It was time to make another album.”

Not long later, that’s just what they began doing. With Vertigo, the group hopes to fuel its creative fire, please fans and sustain itself until the next one.

Valentine has ambitious hopes for the third coming album. “It’s going to pay to get my nails done,” she said.

With expectations running high for the album, Valentine’s nails should be glistening. The featured exposure from the wildly reveled Riff Raff should help too.

“He’ll work with whoever he wants to work with, regardless of how big he gets,” said Fontaine. “He probably recognized that we’re on the same tip of just having fun, grindin’, gettin’ money and good vibes.”

Riff Raff, the self-proclaimed “rap game ‘Dawson’s Creek,’” isn’t all fans can expect from the upcoming album. Hyper Crush is in the studio putting the finishing tweaks and twists on the album, which Valentine prophesizes to be “a good summer album.”

Hyper Crush is staying on their grind. They continued working extra hours in the studio until what was said to be an EP became a full-length album. As for Vertigo, Fontaine expects, “a f***ing awesome Hyper Crush album.” But after it drops, “it’s back to square one.”