I'm So Excited Takes Off with Comedy, Sexuality 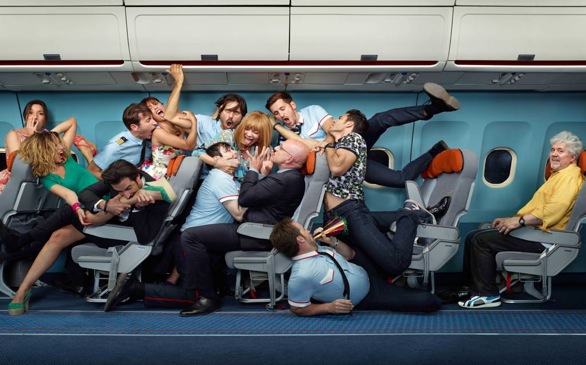 Twenty minutes into Pedro Almodóvar’s new comedy I’m So Excited, moviegoers realize that the work is a “mise en abyme,” which is French for “an image of an image.” In this film, the inner frame of the story is an exact replica of the outer frame.

In the outer frame, León (a Peninsula Airline operator) discovers that his wife Jessica (also a Peninsula Airline worker) has been hiding her newly discovered pregnancy. Before the discovery, León (played by Antonio Banderas) sees his wife (Penélope Cruz) in the face of danger, and his immediate reaction later creates a catastrophic situation abroad the plane.

In the inner frame of the story, the splendid hilarity that takes place onboard Peninsula Flight 2549 is amplified through personal phone conversations to loved ones on the ground. In a comedic twist, everyone on the flight, who has not been drugged into a state of twilight sleep, can hear the conversations. Also, the spoken dialogue between major characters is condensed, eliminating unneeded details and creating a fast-moving pace.

I’m So Excited is a definite departure from director Almodóvar’s more recent dramatic and critically acclaimed films such as Volver, Bad Education and Talk to Her.

“During the ‘80s, I made a lot of comedies,” Almodóvar said in a sit-down interview. “So [I'm So Excited] was like returning to my roots. I think I just needed to make something lighter. It’s a light, very light, comedy.”

Almodóvar, who is out and proud, said he channeled another openly gay director: John Waters, the famous writer of Hairspray (1988) and director of Serial Mom.

“He is one of my best American friends,” said Almodóvar.

With Waters’ approach to satire and gender/sexuality nonconformity, Almodóvar created his “gayest film ever” and described it as “dirty” because the passengers “do everything that is forbidden to do on a plane.”

Also taking place in the second part of the movie, the male flight attendants Joserra, sex-starved Ulloa, and hair-flipping Fajas break out into a drug-enhanced, glittery dance performance choreographed to the still popular song “I’m So Excited” by the Pointer Sisters.

While the movie’s goal is to be over-the-top-flamboyant for laughs, Almodóvar said it is also a “metaphor for Spain that has been hit by a two-year recession” and “has left about a quarter of its workforce jobless.” He explained that I’m So Excited reflects Spain’s “political corruption and financial embezzlement” and “banking crisis that required a European Union bailout last year.”

“What is metaphorical in the movie is that journey, which consists in turning around in circles, without knowing where they are going to land,” he said. “The plane needs [to make] an emergency landing, but [it] doesn’t know exactly who will be commanding it.”

Almodóvar’s I’m So Excited is complex, subtitled and sexual - the combination makes for a great summer date movie.

I’m So Excited releases in Los Angeles and New York on Friday, June 28.