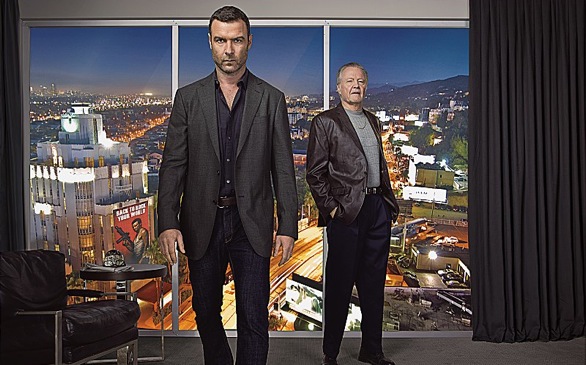 Some people call a cleaning service when they have a mess. Hollywood’s rich and famous call Ray Donovan, Showtime’s newest sharp and devious character.

Played by the virile Leiv Schreiber, Ray acts as the elusive and unconventional “fixer” for any scandal that may arise around town, as long as his clients can afford him.

The show’s vicarious appeal immediately draws the viewer in as the season kicks off with a star athlete waking up in bed with a dead girl and the city’s poster child involved with a transvestite.  However, the drama doesn’t stop there as Ray’s Boston roots and chaotic family provide him with a mess that not even he can clean. Although he tries to keep his business strictly professional, relationships with clients intertwine into his home life, leaving us with a plot that keeps us constantly entertained.

The pilot doesn’t open with Schreiber. Instead, it begins with Ray’s convict father Mickey (John Voight). To Ray, all of his problems can be traced back to Mickey, his Irish mobster of a dad who never protected his family. Fresh out of prison, Mickey wants his place back at the head of the family, a position Ray now occupies. Feuds of the past reappear, and new tension develops between the two that continually moves the plot. As much as Ray hates his father, there is a noticeable parallel between the two, an overarching sense of pride and secrecy.

We’re introduced to the rest of Ray’s family as well. His brothers Bunchy and Terry (Dash Mihok and Eddie Marsan) are both accompanied with their own reoccurring scars and mysteries.  An amusing yet sad balance is established between these three siblings, as Bunch and Terry feed off Ray’s stability. In addition, Ray experiences more family drama as his protective and distant lifestyle causes frequent tension with his wife, Abby (Paula Malcomson).

Ray’s daunting past and family aren’t his only issues, as the whimsically charismatic lives of his mentor Ezra Goldman (Elliot Gould) and law partner Lee Drexler (Peter Jacobson) spice things up whenever they get dull. The two are at the forefront of Ray’s business, but they always leave the dirty work in the hands of Ray and his co-workers: right hand man Avi (Steven Bauer) and logistics specialist Lena (Katherine Moennig). We find the immediate problems of their not-so-respectable livelihood minor in comparison to deeply rooted demons that lay within the characters. Secrets quickly begin to unfold as Mickey’s return from jail challenges everything upon which they stand, further deepening the story.

Some moments, Ray seems impenetrable. But inside his tough exterior, we see a man in need of simpler times. He may mask it well, but Ray too is hurt by the underlying dilemmas. As much as he tries to battle his family, the answer may not be in fighting them but joining with them.

“Ray Donovan” hits you hard from all angles. We see it literally through the aggressive and physical tendencies of Ray’s business, and figuratively in the wide array of problems and issues appearing on screen. The show has a lot of meaning, but it may be attempting to achieve too much at once. The show sends viewers on a wild ride of glamour and corruption, yet the question still remains which one will be kicker that keeps fans coming back.

If the plot doesn’t do the trick, Schreiber’s performance may. The character of “Ray Donovan” perfectly fits his dark yet heartening demeanor well, while the supporting cast provides a full blend of characters that relay off each other and Schreiber nicely.

It may take “Ray Donovan” a few episodes to get the ball rolling, but there is plenty of potential in sight. Combining sex appeal with the underlying notion of fear, Schreiber can make “Ray Donovan” Showtime’s next big show.