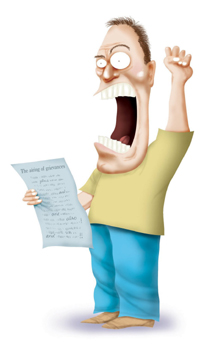 From mighty feats to full-scale fuming, it’s fitting to find the fun of Festivus Feats of strength, a heartfelt airing of grievances, a lone metal pole – yes, there is a Festivus. In fact, the do-it-your-way holiday popularized on "Seinfeld" is alive and well.

The fabled Festivus episode aired way back in December 1997, but it took root and lives on today in cities and towns across America, thriving in two new books and events all over the country. In its purest form, Festivus is truly the people’s holiday, one that they own, unfettered by rules, leaders, miles of wrapping paper, bubble lights and – most of all – the dreaded tinsel. "Festivus is completely flexible. There’s no ruling force telling you what to do. Nobody owns it. And, it’s cheap," says Allen Salkin, explaining the appeal of a holiday that is intentionally low-key, sarcastic and, well, basically anything else you’d like it to be.

Salkin is the author of the new book Festivus: The Holiday for the Rest of Us. It traces the roots of this grass-roots, American anti-holiday movement. Most people associate it with the "Seinfeld" episode in which Frank Costanza, inspired by an ugly tug-of-war in a department store over a doll during the holidays, comes up with the idea for a new holiday for all people. He bans tinsel as too distracting. Feats of strength and the airing of grievances are central to

Jerry Stiller, who played Frank Costanza, wrote in the foreword to Salkin’s book: "There’s something pure about Festivus, something primal, raw in the hearts of humans." Daniel O’Keefe, co-writer of the "Seinfeld" episode, has another explanation in his new book, The Real Festivus: The True Story Behind America’s Favorite Made-Up Holiday. It has an introduction by Jason Alexander, who played Frank’s son, George Costanza, on "Seinfeld."

The real Festivus was started by O’Keefe’s father, Dan O’Keefe Sr., in 1965, and was held through the 1970s and `80s, O’Keefe says. His father, a former Reader’s Digest editor who is now retired, had read anthropology books while studying at Oxford.

"He was interested in ceremony, ritual, magic and religion," O’Keefe says.

He also was looking for something more from the holidays. "He wanted a holiday mostly that wasn’t political or religious in nature, but based on family." Their Festivus bore little resemblance to the "Seinfeld" version.

"It was very different from the TV holiday," says O’Keefe, now a comedy writer living Los Angeles. "We streamlined it for laughs."

Their celebration had originally been held in February on the anniversary of his parents’ first date – not Dec. 23, as it was in the "Seinfeld" episode.

ANY TIME OF THE YEAR

"In reality it could happen any damn time of the year, and that’s what made it so terrifying," O’Keefe says. His family tape-recorded the events, which also included a meal (usually turkey), a clock, a bag, grievances and "some sort of peculiar, mournful ethnic music." O’Keefe documents all of his family’s Festivus celebrations in his book, which includes transcripts of the audio tapes. His mother has thoughtfully had these historic family recordings transferred to CDs. But according to Salkin, the notion of Festivus goes even further back, to the mists of ancient times.

"In ancient Rome, there was this word ‘festivus.’ It was like an adverb, used to describe how the common people went nuts on holidays. That kind of behavior was called ‘festivus,’" says Salkin, a freelance journalist whose book was inspired by a New York Times article he wrote last December headlined "Fooey to the World: Festivus Has Come." "As a journalist, there’s a feeling you get in the top of your stomach when you know you’ve got some gold, you know you’ve got a great story," he says. After the story ran, the Festivus people sought him out.

"All of a sudden I started getting a flood of e-mails and letters, stuff about people celebrating it all over the world," Salkin says. "It was so widespread. The first party I heard from was in Ohio. Then I heard of them in Illinois. …" In five months of research for the book, he found people like Julianne Donovan of Kansas City, Mo., who holds what he describes as "the best Festivus party in the country." Donovan, a graphic artist and illustrator, started her party about three years ago when she realized that having an office party based on a religious celebration would leave some people out. She no longer works in that office but continues to have a Festivus party, with its made-up central character, "Festivus Faustine," a kind of goddess.

"She’s got nine candles on her head for Hanukkah," Donovan says. "The Star of David is her one eye, so she’s a cyclops. She’s got a Christmas-tree body. In her purple-gloved hands she holds a corn cob for Kwanzaa." Other features of the party include grievances that guests write on scraps of paper, which are then put into the Festivus pole. "At the end of the night we read them aloud," she says.

"I try to get my guests to fight each other, so I’ve come up with little Feats of Strength. The favorite is the thumb wrestling," Donovan says. She made thumb outfits from the thumbs of gloves, cutting in eye holes so they look like masks.

"You’d be amazed at how mean the thumb looks with a mask," she says. "My brother-in-law has abnormally long thumbs. He’s been the reigning champion so far." But why in the world does Festivus live on?

"Things catch on for a reason," Salkin says. "People saw it on ‘Seinfeld.’ It was only six minutes of this episode, but it just struck them at their core, something about the commercialism of the holidays and the meaninglessness of some of the rituals. Something made sense about Festivus."

As Donovan notes, it doesn’t exclude.

Festivus also inspires creativity. Donovan has held a hula hoop contest as a Feat of Strength. Salkin says he has heard of others stuffing a pinata with written grievances and then whacking away at it until they spill out.

O’Keefe says that disdain for the commercialism of holidays pushed his dad into action. "He wanted something that wasn’t tainted by the trappings of commercialism. Christmas was becoming a celebration of consumerism," O’Keefe says. "President’s Day is about selling mattresses." Besides, he says, "All holidays are made up at some point."

Says Donovan: "I think people are saying, ‘We want to get back to being with our friends and our families and having a good time, and not being afraid to come up with our own customs and traditions.’" She adds, "And I think that scares some people."

Salkin thinks it has something to do with the rebel that lives in all Americans.

"It’s this American ‘don’t tread on me’ thing. Americans don’t want to be told what to do by anybody, … being told what to celebrate, and how. "It’s this beautiful, grass-roots thing that, yes, people learned about from this mass-media thing called ‘Seinfeld,’ but that was just the spark. "It caught fire. It’s real."