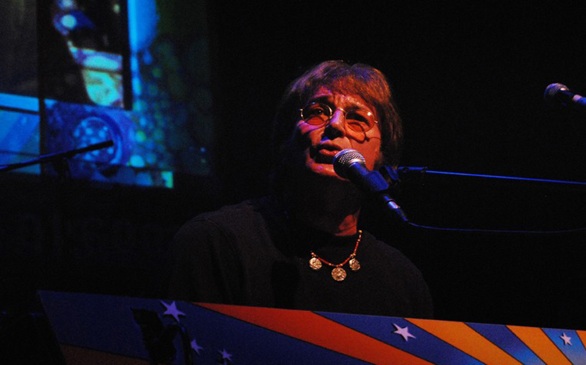 Attention Hollywood producers: If you’re looking for some source material for that John Lennon biopic that’ll inevitably hit theaters (and unabashedly bait some Oscar trophies), look no further. "Just Imagine," written and directed by Steve Altman, might just be the show that’ll inspire some movie studio bigwigs to finally put the legendary Beatle’s life story on the big screen.

Singer-actor Tim Piper plays the Brit with the iconic specs, and he’s backed up by a group of music veterans (Greg Piper, Don Butler, Morley Bartnof and Don Poncher) on drums, bass and keyboards.

Complemented by a multimedia presentation, the show starts with a montage of newspaper headlines and soundbites that revisit Lennon’s tragic death in 1980. From there, the audience is treated to a trippy transition in which Lennon himself (Piper) descends from the heavens on screen, and then physically appears on stage through a smoky haze – courtesy of a cheesy fog machine. It’s a nifty idea, having Lennon speak to us from The Beyond, reminiscing about key moments from his life, taking us back to his childhood through visuals and nostalgic tunes (nostalgic for anyone born before 1970 or anyone with a soul just as old).

While Piper, as Lennon, waxes nostalgic on “the wine and the women, the users and abusers,” the audience is transported to that magical era when war was a cause worth fighting against, when VW bugs didn’t resemble iPods on wheels and when music genuinely provoked and delivered social messages. There’s even some slightly juicy insight on the behind-the-scenes relationships he had with his fellow bandmates (On McCartney: “Paul was the olive oil to my vinegar”).

The second act begins with an acoustic medley while Piper walks up and down the aisles of the intimate Hayworth Theater, interacting with audience members. The call-and-response aspect of the show kicks in here, and anyone who grew up with this music will shout along to the lyrics and just roll with it.

Then, as Lennon makes the transition from his time with the Beatles to his solo career, things get more personal, and he dedicates a little segment to the lady love who changed his life, Yoko Ono (“Behind every great woman is an idiot”).

From there, the rest is magical musical history.