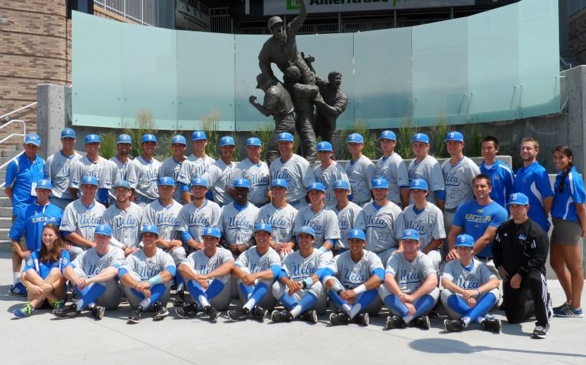 OMAHA — If UCLA's baseball team ever wondered what playing in Starkville, Miss., was like, well, it knows now.

And if Mississippi State wondered before Monday night how in the world a .248-hitting team without an overpowering ace or closer got to the College World Series final, well, it also knows now.

Mississippi State fans colored this town maroon and turned TD Ameritrade Park into their own (Bull)dog house. Their pitchers struck out 12 and didn't give up a hit after the fourth inning, too, but it didn't help the final line.

UCLA pulled within a win of its first NCAA baseball championship with a 3-1 victory over Mississippi State in front of 25,690, more than 90% of which seemed to favor the Bulldogs.

"We embrace that environment," UCLA Coach John Savage said. "Since we've been coming to Omaha it seems like everybody has bigger crowds."

What opponents don't have is that little extra the Bruins have had during what is now a 10-game winning streak.

"That was kind of a Bruins game," Savage said.

Kind of yes, kind of no. UCLA was very un-Bruins-like in a couple of ways. They stranded runners by failing to execute and pitching ace Adam Plutko struggled through the last three of his six innings.

But the Bruins also did a couple of things they almost always do: play great defense and get just enough from record-setting closer David Berg.

Although Plutko wobbled substantially after starting with three perfect innings, he still gave up only one run and four hits.

The bullpen helped, as it usually does. And so did sophomore right fielder Eric Filia, who made a couple of nice plays and had a big hand in all of UCLA's runs.

Filia's first-inning opposite-field double to left field set up UCLA's first run and his two-run single in the fourth inning provided the margin of victory.

Mississippi State (51-19) must win Tuesday evening to force a third and deciding game Wednesday. If UCLA wins, the Bruins (48-17) will claim the school's 130th national title since 1950.

UCLA needed to strike early and it did. Mississippi State gave sophomore right-hander Trevor Fitts the sixth start of his college career, and it lasted only 11/3 innings. Left-hander Chad Girodo came on after that, and it soon became apparent why he has nine victories out of the bullpen.

After the Bruins struck for their two fourth-inning runs, Girodo was masterful, retiring 14 of the next 15 batters without giving up a hit.

He wanted at least one pitch back, though, the slider Filia said he was expecting and that he crushed down the right-field line for two runs.

"A lot of times the bigger the moment the better he is," Savage said of Filia, the Bruins' .276-hitting No. 3 batter.

The same could be said of Plutko … usually.

The junior right-hander from Glendora ran his career postseason record to 7-0, though the Bulldogs had him on the ropes several times.

Savage summoned the side-arming right-hander Berg, who induced an inning-ending double play on his third pitch in the eighth inning, then stranded the tying runs on base in the ninth inning for his NCAA-record-setting 24th save of the season.

It was also Berg's 50th pitching appearance this season, making him the first player to appear in that many games in two seasons. He also did it last season.