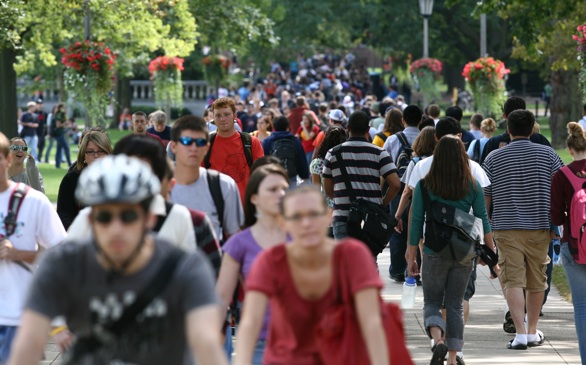 Interest rates on a quarter of federal student loans are set to double next week if the government does not intervene.

“It's unfortunate for students. It's unfair for our students,” Mann said. “(Education) is a good investment not only for the students, but for the economy as a whole. The government should be encouraging students to go to college, not discouraging them.”

But Susan Stitely, assistant director of financial aid at Frederick Community College, said the change may not have a large impact on student debt because it affects interest accrued after a student leaves school rather than during college.

Subsidized Stafford loans are government funds offered to students who cannot afford to pay for their own education, according to the U.S. Department of Education. The federal government pays student interest on the loans for as long as the recipient is in school.

The subsidized loans now have the lowest interest rate of any federal student loan at 3.4 percent. Unsubsidized Stafford loans, on which the government does not pay for interest during school, accrue interest at 6.8 percent.

The rate increase affects only new loans made to current and future students, not those being paid off by college graduates and dropouts.

Subsidized Staffords make up about 26 percent of the total student loans given by the federal government, according to the Congressional Budget Office.

Subsidized loans are often seen as a better option because they do not accrue interest during school like unsubsidized funds, Stitely said.

In May, the U.S. House of Representatives passed a Republican-sponsored bill that would peg the interest rates of all Staffords to the U.S. Treasury rate. This would cause student loan interest rates to vary by year, rather than keeping the same interest rate for the duration of the loan.

Subsidized and unsubsidized Staffords would then use the 10-year Treasury rate plus 2.5 percentage points, but could go no higher than 8.5 percent.

Next year's rate would be 4.66 percent, 1.26 percent higher than the current rate for subsidized Staffords.

A variable rate would cause much uncertainty for students and graduates worried about their bank accounts, Mann said. Because current interest rates are among the lowest ever, he said, students can expect their subsidized loan debt to steadily increase after college.

“I'm not sure it's going to affect (students') ability to pay back their student loans as much as it is going to affect the cost of going to college,” he said. “Less disposable income means less purchasing of goods.”

If students cannot cover the entire cost themselves, they should finance college with scholarships, grants and other funding that does not have to be paid back, Mann and Stitely agreed.

“Debt-free at all costs is the best way to avoid this issue,” Stitely said.