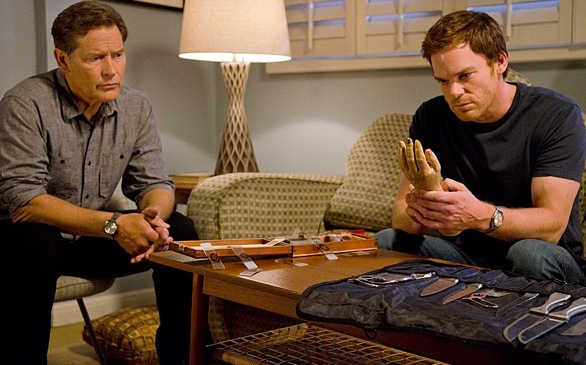 If the "Dexter" Season 7 finale left you speechless and looking for answers to all your burning questions, the Season 8 premiere (the last "Dexter" season premiere ever!) will provide some satisfying relief. Without spoiling exactly what the answers are, just trust me when I cryptically say you will know why fan-favorite Deb Morgan shot the person she did and if she regrets not shooting the other person in the situation.

Season 8 also promises to answer questions you and other loyal "Dexter" fans never even knew you had.

When an unlikely new friendship is forged, Dexter (played by producer Michael C. Hall) learns the truth about whose idea it really was for him to become a brutal killer of…well, other killers. (Cue menacing music.) The storyline also allows for a complex and intriguing new regular character to join the already very eclectic, colorful team at the fictional Miami Metro police headquarters.

Besides the reveal of who really created the psychopathic mind that is Dexter Morgan, the beginning of the final season also boasts plenty of brother-sister drama from your favorite messed-up duo.

In the aftermath of her Season 7 actions, Deb (played by Jennifer Carpenter) runs away to shackle up with a coke-snorting-jewelry-stealer, calling it “undercover” when it is really just looks like her descent off the deep end. No matter what Dexter does to pull her back from the brink, Deb appears to be too far-gone. It’s also a fun installment of a game: how many times can Deb say the f-word in an hour? My tally was about 35 times, give or take.

As the "Dexter" final season begins, this rare and compelling glimpse into the complex mind of a morally guided killer becomes even more befuddled as Dexter’s life begins to unravel. Through his now more panicked thoughts (revealed via voiced-over narration), the audience is privy to the dread Dexter feels as more and more people are let in on his dirty little killing secret.

Of the decision to end the show with the eighth season, Michael C. Hall stated, “It just feels more difficult to keep Dexter thriving or surviving within this [show’s] context, beyond an eighth season.”

In reality, a story depicting a killer killing other killers was never expected to last even as long as it has. Audiences and the crew alike have been pleasantly surprised at "Dexter"’s success and are content with its imminent ending.

New characters, new revelations and new serial killers plague this thrilling old show for its eighth and final season. Catch the beginning of "Dexter" Season 8 on Sunday, June 30 on Showtime.