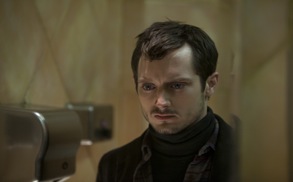 Elijah Wood steps into the shoes of a psycho killer in director Franck Khalfoun’s (P2) remake of the 1980 cult classic, Maniac.

Frank (Wood) is a lonely owner of a mannequin store with an abusive past and an innate need for women’s scalps. When he meets a young photographer, Anna, his compulsion to stalk and kill escalates out of control in one of this year’s most fun-to-watch slasher flicks.

Read what Wood and Khalfoun had to say about the upcoming film.

Campus Circle: How familiar were each of you with the original Maniac?

Franck Khalfoun: I stumbled on a VHS copy in the late 1980s, and it was the iconic “man-with-bulge-holding-decapitated-head.” I saw it, and it blew my mind. It was powerful and shocking, and I had never seen anything like it at the time. But primarily, I remember Joe Spinell’s performance, and that would always stay with me - the empathy that I felt for his character…by the end of the movie, I completely forgot about the victims, and I felt so bad for this guy. That’s what I kept with me until I was approached for a remake.

Elijah Wood: I hadn’t seen the original film. It’s certainly a classic within the genre. I didn’t see the film until we actually started shooting…I guess part of that was so that I would work to establish the character from my perspective, without having seen what Spinell did. [The original] is really a product of its era, of New York at the time - the danger of the streets, the dirt and grime that comes off the screen. I think it’s hard to recreate that now.

CC: Why did you decide to place Maniac in Downtown Los Angeles?

FK: When I read the script, it still felt like New York in the 1970s. I remember my time living in Downtown L.A., and it’s mixture of homeless people, crazies, artists and rich people all living in that area. I figure what a great place for this guy to blend in and find victims.

CC: For both of you having done Maniac, is it important for you to continue doing genre films?

EW: I love the genre and have been a fan for a long time. I’ve actually just started a production company, specifically to produce horror films. So I think for me, I want to live in the genre and continue to make films, probably not from an acting perspective.

FK: For me, it’s not about genre or non-genre. I feel like movies are good or they’re bad. I don’t seek out movies based on their genre; I seek out human stories and experiences. If they turn out gory, then so be it.

CC: How challenging was it for both of you (as actor and director) to shift the entire point of view from Frank’s eyes during filming?

EW:  For me, as an actor, my challenges were logistically getting behind the camera and figuring out ways to be there for the other actors. The limitations create more challenges but also a very exciting process.

FK: For me, it was a huge challenge because movie-making is all about following characters and feeling their experiences. In terms of doing horror and suspense, it’s all about building tension and slowing down time so that you can raise fear. It was challenging to do that without seeing our main character.

CC: Joe Spinell and Elijah Wood in a knife fight: Who would win?

Maniac opens at Arena Cinema and the Downtown Independent in L.A. on June 28th!