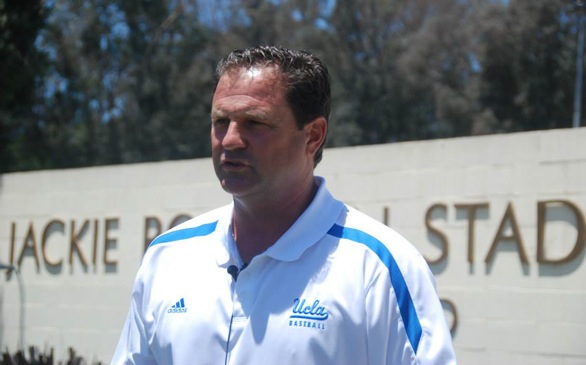 In one of his career steps before taking over UCLA’s program in 2005, Savage was USC’s pitching coach.

And there are plenty of people around USC who would like to see him back in cardinal and gold — this time as coach of the Trojans.

USC Athletic Director Pat Haden is said to be one of them.

Haden hasn’t publicly revealed who he favors to fill that open position, but Savage is thought to be at the top of the list. The Trojans have been waiting for UCLA’s season to end before talking to him.

USC fired Frank Cruz as coach just before the start of this season, and the program has been guided by Dan Hubbs, who had been Cruz’s associate head coach.

In an interview late Tuesday night in Omaha, just a little more than an hour after UCLA had recorded the final out in an 8-0 championship-clinching victory over Mississippi State, Savage was asked if he was aware of USC’s interest.

“No. No one has contacted me,” he said. “My main focus has been this. I put my heart and soul into this every day and I’m very proud of our team and proud of our accomplishments and right now I’m enjoying this as much as I can.”

If USC does make an offer, Savage is probably in position for a pay raise, whichever path he chooses. The Trojans’ offer could be in the $500,000 range. At UCLA, Savage is paid more than $300,000 annually, including bonuses, and his contract already has been extended a couple of times. His current deal runs through 2017.

Haden declined to comment Wednesday through an athletic program spokesman.

Dan Guerrero, UCLA’s athletic director, said USC had not asked permission to speak with Savage, a courtesy that sometimes is extended and sometimes isn’t. But interest from USC wouldn’t surprise Guerrero.

“It’s something we have to go through almost every year with a number of our coaches,” Guerrero said after Tuesday’s game. “I believe we have as fine an array of coaches as you’ll find at any place across the country. So to hear something like that is flattering.”

Guerrero, a former UCLA ballplayer, surely won’t let Savage go without a fight. The Bruins have participated in the NCAA playoffs in seven of the last eight years and advanced to the College World Series in three of the last four.

This season’s team finished third during the Pac-12 Conference regular season, but closed with 11 consecutive victories. In Omaha, UCLA gave up four runs in five games and impressed baseball purists with its execution on offense and defense.

In a news conference after the Bruins clinched, Savage noted the irony of a connection between UCLA’s title and a championship USC won 15 years ago, when he was in his second season as the Trojans’ pitching coach.

Savage became emotional and paused to compose himself when he was asked about the influence former USC coach Mike Gillespie had on his career. Gillespie brought Savage to Los Angeles, hiring him away from the University of Nevada.

“Mike hired me in 1997 and it changed my entire life, my family’s life,” Savage said.

Gillespie is no longer at USC; he’s the coach at UC Irvine. College baseball isn’t the same, either.

— Junior pitcher Adam Plutko was chosen as the College World Series’ most outstanding player. ... Plutko (29) and title-clinching winner Nick Vander Tuig (27) have combined for 56 wins in three years, a school record. Gerrit Cole and Trevor Bauer combined for 55 from 2009 to 2011. Plutko was selected in the 11th round of Major League Baseball’s amateur draft, and Vander Tuig was selected in the sixth round. Cole and Bauer were selected Nos. 1 and 3 overall in 2011. ... In five CWS games, UCLA pitchers stranded all but one of 27 runners in scoring position.