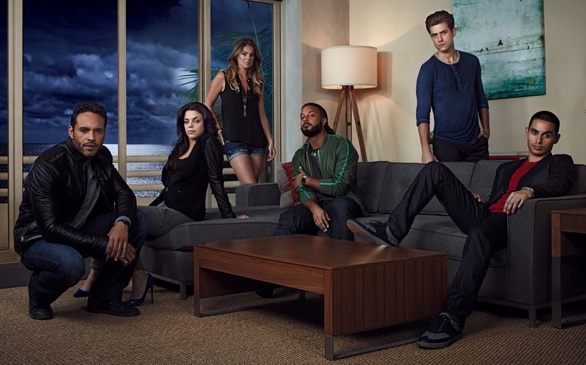 1. “Graceland”
Thursdays, 10/9c on USA
USA’s newest crime drama stars Aaron Tveit, known for his roles in “Gossip Girl” and Les Misérables. “Graceland” focuses on a group of young undercover agents from different US law enforcement agencies, including the DEA, FBI and ICE. Living in a confiscated yet luxurious Southern Californian beach house called Graceland, the agents spend their days assisting each other in undercover operations. The series starts as rookie FBI agent Mike Warren, played by Tveit, is assigned to Graceland to investigate FBI Senior Agent Paul Briggs, played by Daniel Sunjata. This is not your typical crime show, folks. Since the officers come from different agencies, the series doesn’t focus on one type of crime, allowing for a unique variety of cases. The show keeps you on your toes with lots of quick thinking and improvising, as the agents are forbidden from disclosing their true identities to anyone outside of Graceland. Missed the first few episodes? No problem, they’re all available on Hulu for free!

2. “Mistresses”
Mondays, 10/9c on ABC
Suffering from “Desperate Housewives” withdrawal? ABC’s newest drama “Mistresses” will definitely fill that craving. The perfect summer guilty pleasure, “Mistresses” follows four women as they embark on their own extramarital affairs and investigate those of their partners. And let me tell you: it’s addicting as hell. Really. I sat down to watch a bit of the pilot and spent the next three hours watching every episode to date. The show is based on a British series by the same name, and stars Alyssa Milano and Rochelle Aytes. I was happily surprised to find that the mistresses do take their affairs seriously, and so sometimes it’s hard to judge them for their actions. This show is full of sexy scandals you won’t want to miss.

3. “The Fosters”
Mondays, 9/8c on ABC Family
Produced by Jennifer Lopez’s Nuyorican Productions, “The Fosters” premiered on ABC Family on June 3. The series focuses on perhaps the most modern family you could possibly think of. A biracial lesbian couple, Lena Adams (Sherri Saum) and Stef Foster (Teri Polo) raise three children: Stef’s 16-year-old biological son Brandon and Jesus and Mariana, a pair of 14-year-old adopted Latino twins. In the pilot, siblings Callie and Jude are added to the family after being tossed from one foster home to another. If you are keeping track, these five kids have six different biological parents and the family contains three different races. Did you get all that? Although it does seem like the creators just threw every single controversial dynamic into one show, the result is pretty entertaining. The show is driven by the great chemistry between the family members and surpasses all the backlash it has received from conservative groups like “One Million Moms.”

4. “The Goodwin Games”
Mondays, 8:30/7:30c on Fox
Tune into Fox’s newest comedy “The Goodwin Games” to watch three adult siblings duke it out for their deceased father’s $23 million inheritance. Siblings Henry (Scott Foley), Chloe (Becki Newton) and Jimmy (T.J. Miller) return to their hometown in New Hampshire for their father’s funeral and are surprised to learn they must compete in a series of games to determine the recipient of the fortune. The pilot also introduces Elijah, the fourth contestant in the games, of which the siblings have never heard of. Elijah’s relationship to the Goodwin’s father will be a continual mystery, an ongoing teaser like Fez’s origin on “That 70’s Show." This comedy is smart and employs the same wacky but hilarious humor as “New Girl.” The fact that the characters surpass their own stereotypes (pretty girl Chloe turns out to be a math genius) makes them all the more lovable.

5. “Under the Dome”
Mondays, 10/9c on CBS
Ever wonder what it would be like if your town was suddenly separated from the rest of the world by a giant invisible dome? Yeah... me neither. But, CBS’s new science fiction horror series “Under the Dome” is sure to answer the question anyways. The new show is based on the Stephen King novel of the same name and takes place in the small town of Chester’s Mill. I find the catastrophic topic of the series really relevant, as it seems many of us are currently counting down the days until that zombie apocalypse or alien invasion. The characters’ realistic responses to such an unfeasible situation makes you really think about what you would do in a similar circumstance. If I haven’t convinced you: my favorite moment from the pilot episode was when the dome first appeared and it split a cow in half.

6. “The Bridge”
Wednesdays, 10 on FX
FX’s newest series “The Bridge” is set to premier on July 10 and like “Graceland,” this crime drama possesses a unique angle that grabbed my attention right away. The show follows Detective Sonya North (Diane Kruger) as she partners with Mexican homicide detective Marco Ruiz (Demián Bichir) to investigate a killer terrorizing the Texas-Mexico border. I’m looking forward to the controversial topics that I’m assuming the series will bring up, such as immigration and American-Mexican relations. “The Bridge” is based off a Danish / Swedish series by the same name, which refers to the land that links America and Mexico. Although critics already have high hopes for this new series, I wonder how long the show can continue if it only focuses on catching one criminal.