Chanel West Coast is Not Your Average Blonde: The lyricist is looking to take her rap game to new heights. 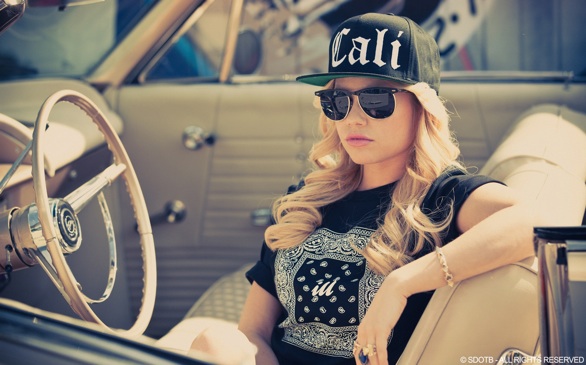 To get the ball rolling, she signed with Lil Wayne’s label Young Money Entertainment and released her debut music video for “I Love Money.” Not a bad way to start, right?

The gorgeous, petite blonde’s rap career officially began when she was 12. It started to take off in 2009 when she got a great opportunity to become a regular face of MTV. “A lot of people don’t know that music has been in my life since I was 2. They just know me from TV, but Rob [Dyrdek] actually found me for my rapping,” she said.

Since joining MTV, Chanel has collaborated with female artists Tiffanie Anderson (Girlicious) and Somaya Reece on various singles and signed with Polow da Don’s label. She finally joined Young Money in early May.

Although grateful for her time on TV, Chanel’s ready to show the world that behind her pretty face and charming personality, there lie musical roots that extend a lot further than people realize.

The child of a heavy metal rock chick from Los Angeles and a DJ from New York, Chanel is certainly unique. She strives to capture rap and hip-hop's modern style while mixing in the poetic essence of her biggest influence: late 90s rap legend Tupac Shakur. When she releases her first mix tape Now You Know early this summer, we will find out if Chanel West Coast is for real.

To make her new mix tape official, Young Money pulled out all the stops for the Chanel West Coast #NowYouKnow release party earlier in June. The house reeked Young Money attitude as guests were greeted by a long laser-lit staircase, leading into a towering white house decked out in all white leather and black marble. The words on one man’s sweater captured the party’s nature best: “Sex, Drugs and Rap.” The term only seemed fitting as attractive people mixed amongst a haze of rap, alcohol and marijuana.

If her skills on the tracks don’t impress you, Chanel’s wardrobe is sure to dazzle. The 24-year-old is able pull off an array of looks, as she’s been seen in music videos and photo shoots dressed in red-carpet glamour and vintage chic. Chanel’s style was on point at her release party. She rocked a black leather dress in which the upper half radiated in vibrant sequences, mimicking the pattern of Wonder Woman’s top. To finish off her outfit, platinum heel-less wedges were strapped to her feet and an all-black leather Chanel hat sat backwards atop her dome. Although she might be little in size, Chanel’s sweet yet serious swagger commanded the room’s attention.

I was able to capture a few moments with Chanel before she took the stage for all her guests. I sought to find out the story behind the sexy smile, what exactly the world is about to know.

In the effort to make her name as a rapper, Chanel wants her album to reflect “[her] story of the life [she] grew,” one of having less and wanting more. She makes that message clear in her single “I Love Money.” She told reporters, “I’ve always loved money simply because I’ve never had it. It’s a very relatable story that will help fans connect.”

Heartedly, she recalled back to some of her childhood money-making schemes.

“I used to have yard sales on my front lawn and sell my toys," said Chanel. "I was actually suspended in 3rd grade for selling pencils on the playground. I’d buy a big pack at the store and sell them to kids for a dollar.” As the room laughed on, Chanel politely grinned, then chuckled out, “I’m just out here hustling.”

Although she wants her music to be fun, cunning and provocative, she doesn’t wish to only entertain – she wants to inspire as well. Chanel hopes she can provide something “for little girls to look up to” and believes that “if you have a dream, little girls will want to be you and in turn, dream themselves.”

Rapping is her passion, but Chanel doesn’t see it being her only musical outlet. Once she can establish herself on the 1s and 2s, she looks to try her talents in other genres.

“After rap I’d like to move in a more pop, bluesy rock direction. I feel my deeper voice suits me well for that. I admire the transition Pink has made during her career,” she said.

In the meantime, her plate's full as she is set to tour with Lil Wayne, T.I., 2 Chainz and the rest of Young Money this summer.

“I’m really excited, but really nervous. It could get crazy,” she said.

However, Chanel's summer doesn’t stop there. She said that once her album officially drops, “the next album is coming quicker than the first.”

“I’ve got so much music in the bank already,” she said.

With the proper guidance, Chanel could become a star in the music industry and maybe even fashion (she’s planning to launch her own line in the future). The rapper knows when to play it cool or sweep you off your feet. She’s also not afraid to tell you that if she could have dinner with one musician, alive or dead, it would be Bob Marley.

"I picture us getting really high before and having the craziest munchies,” said Chanel.

Clearly, rapper swag is something she’s not lacking. If she can replicate that in her music, Chanel West Coast could be scary good.

For more information on Chanel, follow her at @chanelwestcoast.