Willy Wonka and the Chocolate Factory: Dec. 16 @ the Nuart 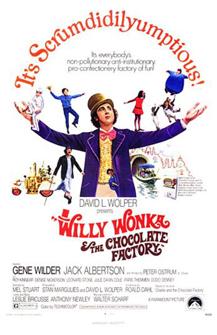 Forget Tim Burton’s recent retooling of the Roald Dahl book, which put an ultra-creepy Johnny Depp (who is usually fantastic) into the shoes of one of children’s literature’s most famous characters.

On Friday evening, Dec. 16, at midnight (as part of it’s popular "Think Midnight" series), the Nuart Theater in Los Angeles will host a screening of Willy Wonka and the Chocolate Factory – the 1971 film directed by Mel Stuart and starring a delightful Gene Wilder in the title role of the film’s wacky candy maker.

In Wonka, which is chock-full of intriguing sets, eye-catching colors and a fanciful story line, a young, poor boy named Charlie Bucket – who lives in a small, teetering house with his parents and four grandparents – finds some money on the street and uses it to buy a delicious Wonka chocolate bar. There is a worldwide contest going on to find one of Wonka’s golden tickets – which will grant each lucky winner a chance to enter Wonka’s famous factory – and Charlie holds out a sliver of hope that he will find a ticket.

His dream comes true, then, when he opens his sole Wonka bar and sees a golden ticket glimmering inside. After this, it’s on to Wonka’s famous factory, which is filled with things like chocolate waterfalls, everlasting Gobstoppers and Oompa Loompas. If anyone asks, it’s way better than Burton’s version.

Willy Wonka and the Chocolate Factory screens at midnight on Dec. 16 at LA’s Nuart Theater. The Nuart is located at 11272 Santa Monica Blvd., just west of the 405 Freeway, in West Los Angeles, (310) 281-8223. For ticket information and more details about The Nuart’s "Think Midnight" series, visit www.landmarktheatres.com.