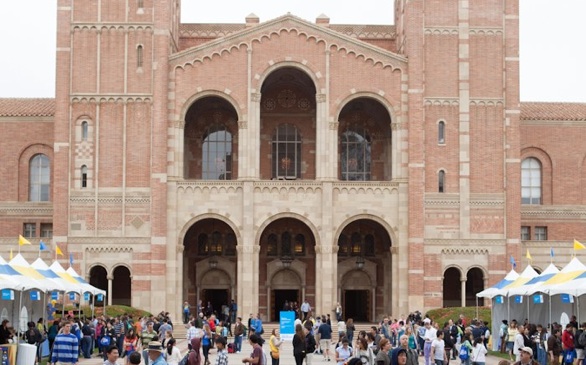 Despite some faculty and student opposition, UC President Mark G. Yudof has approved a controversial plan to turn UCLA's MBA program into a self-supporting unit that depends on tuition and donations without state funding.

The approval comes after nearly three years of debate over what critics alleged was an attempt to privatize part of a public university. But the final version is less ambitious and keeps the UCLA master's degree in business administration under some central UC control.

Yudof sought to counter criticism that the UCLA Anderson School of Management was seeking independence from a financially beleaguered UC. He noted that the university-wide faculty senate would have final say over academic matters and the UC system president — although not the Board of Regents, as is now required — would set tuition for the MBA students.

He also emphasized that the two-year program, which enrolls about 720 students, must continue to offer the same levels of financial aid as similar programs across the UC system.

In a letter this week to UCLA Chancellor Gene Block, Yudof wrote that the final plan would help UC financially by freeing what officials estimate will be $8 million a year in state funds that UCLA can put to other uses.

"The university is facing unprecedented challenges due to the withdrawal of state support, and careful deliberation on ways to respond is important for preserving our academic quality going forward," wrote Yudof, who leaves office in August.

A majority of Anderson's faculty support the change and it narrowly won approval from the UCLA faculty senate after much scrutiny. But a powerful committee of the UC system's faculty government voted last year to suspend its review of the proposal and questioned its effect on educational quality and affordability, and possible undue influence by donors.

The panel, which controls graduate studies, also said UC rules would not allow such a change for a pre-existing master's degree that serves full-time students.

The UC system has 50 self-supporting graduate programs, many of which serve part-time students or were established without state funding, officials said. The change at Anderson is believed to be the largest such move in UC, and follows a national trend at business schools, including those at the University of Michigan and the University of Virginia.

Anderson school Dean Judy Olian said in an interview that the plan will allow more flexibility in assigning and paying faculty for additional courses. It also will encourage donors to give more money because they know that state funding, even though a relatively small part of the budget, is ending, she said. Four donors have pledged $19 million combined after the change, according to Olian.

Olian's original plan called for the entire school to end state funding but after opposition, she limited the switch to the full-time MBA program and kept the doctoral degree and undergraduate accounting courses on public support.

Annual tuition and fees for the master's was $48,243 annually for California residents in 2012-13, not including living costs and other expenses, and the school is seeking an increase to $52,112 for next year.

Olian said having tuition set by the UC president rather than the traditional method by the regents will give students faster and more predictable answers about costs and that she expects tuition increases will be lower than under the old funding model.

However, Justin Chung, who heads the committee on graduate and professional schools for the UC system student association, said that taking tuition decisions from the regents reduces public opportunity to comment and challenge higher costs.

Chung said he was "saddened" by Yudof's approval of the Anderson proposal and described it as one unit seeking "to divorce itself from being part of a public university."

Other critics said they feared it would become a precedent for other UC business and law schools that are able to charge high fees and have wealthy alumni to help support them.