"Sexting and Selfies": A night of sex, art and tea at the Bob Oré Art Gallery. 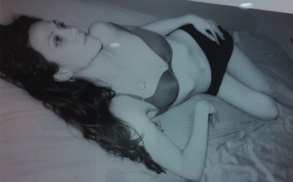 Tucked away in West Hollywood just off of Melrose Avenue is the uniquely beautiful Bob Oré Art Gallery.

On Thursday, June 27, the gallery featured the work of two up-and-coming female artists: Jennifer Bardot and Alia Funaro. These two are looking to shake up how we perceive sexuality with their exhibit “Sexting and Selfies.”

"Sexting and Selfies" features photos of different female body parts and attempts to mirror the pictures an individual takes of him or herself with a cell phone (called "selfies"). The photos are provocative, sexy and occasionally a bit misleading.

The two artists are able to redefine how we see beauty by highlighting individualism. My favorite piece was Bardot’s “Happy Tuesday,” which is an aerial view of three women’s breast. However, this photo could also appear as two women enjoying a bubble bath.

Although the exhibit mainly focused on Bardot and Funaro's work last night, the gallery also displayed Daryl Henderson's pieces. His display included two pieces and a live painting exposition. Henderson normally plays the role of a photographer, but he has recently been venturing into the paint and print scene. His pieces in the gallery captured the female essence very similar to Bardot and Funaro's pieces; however, his also provided political and romantic messages.

In one of Henderson's paintings, “Every once in a while, worship someone else’s God" was printed over an undefined body. His live painting expo was quite amusing, as he flirted between his canvas and the crowd throughout the night, slowly putting more strokes to life.

Bardot, Funaro and Henderson's art is truly inspiring, but their art wasn’t the biggest spectacle of the night. Amidst the glamour, two stunning pole dancers suddenly appeared in the crowd. Sensually, they began to swing their bodies up, down and around the poll that sat directly in the middle of the room. The attendees enjoyed it, especially the older men.

Another hip feature of the party was the bar, sponsored by TATRATEA, the original tea liqueur. The drinks' alcohol content ranged from 22 to 72 percent, and there was an array of flavors, such as coconut and mint.

This opening was a smashing success, with beauty, poise and individual strength as the night's themes. It might be best to define the event with TATRATEA's slogan, “Dare to be different.”