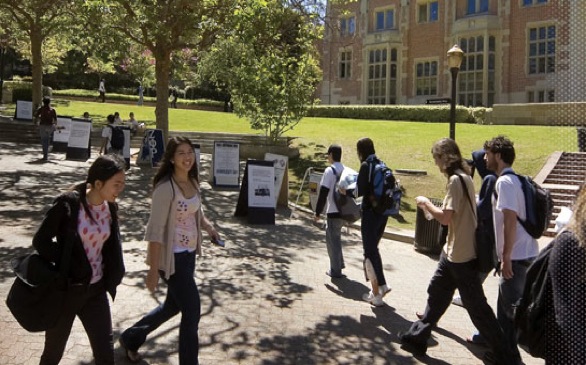 In the nearly two decades since California voters banned the use of affirmative action in college admissions, the two most competitive University of California schools — UCLA and Berkeley — saw enrollments of black and Latino students plunge and have struggled to recover.

The UC system has adopted a number of recruiting and admissions measures to legally work around the 1996 ban, Proposition 209. But the enrollment of these two groups has not completely rebounded. At UCLA, for example, African American freshmen dropped from 7.1% of the class in 1995 to 3.6% last fall. At UC Berkeley, African Americans made up 6.3% of freshmen in 1995 and 3.4% last fall.

The U.S. Supreme Court on Monday signaled that it was not ready to forbid affirmative action in a case involving the University of Texas. The high court, in returning the case to a lower court, said colleges must first try other ways to diversify campuses before turning to racial preferences.

California public universities have tried new efforts to boost ethnic diversity without using affirmative action, providing a possible example for other states to follow. But those efforts have had only limited success, according to top UC officials, who filed a brief with the Supreme Court supporting Texas' use of racial preferences.

Among the approaches UC officials have attempted: Undergraduate applications are no longer reviewed based solely on high school grades and standardized test scores; those still are the most important factors, but they are placed in the context of students' talents, life challenges, language barriers and family income.

A student is now guaranteed a spot in the UC system, although not necessarily at UCLA or Berkeley, by being in the top 9% of his or her high school class, not just in the top tier of students statewide. UC also dropped the requirement for two SAT subject tests, something low-income and minority students were more likely to skip or neglect. Financial aid was expanded.

Recruiting and tutoring were bolstered at high schools with large numbers of low-income and minority students. UCLA, for example, works with students from 58 high schools and 24 middle schools in Los Angeles County to, among other things, prepare them for SATs and advise them on the courses needed for admission.

Some of those measures might violate aspects of Proposition 209, alleged Ward Connerly, a former UC regent and the main backer of the ban. But he said he did not want to pursue his suspicions because he thought such fights would be futile and because it was more important that California universities in general have shifted "from a paradigm in which race seeps out of every pore of higher education to one where they are not expected to use it."

Connerly for decades has argued that affirmative action caused high-achieving minority students to be viewed suspiciously, as if they didn't deserve places at their universities. He said he has no regrets about the law, even though black and Latino numbers have dropped at some UC campuses.

California students, he said, "have so many opportunities to go to college, whether it is at UC, a Cal State or community college."

UC insists the measures are all legal. "We are not breaking the law. We are not — wink, wink — implementing affirmative action by any other name," said system spokeswoman Dianne Klein. If UC's measures were a strong-enough substitute for affirmative action, "UC would be much more diverse than it is," she said.

Across UC campuses overall, the enrollment of blacks has nearly recovered to its levels before Proposition 209. Latinos' presence, after a temporary dip, has grown beyond its pre-1996 peak, partly because of enormous increases in Latino high school graduates.

But the numbers have been stark at UCLA and Berkeley, which have the highest admissions standards of UC's nine undergraduate campuses.

UCLA faced sharp criticism in 2006 when the proportion of black students in the entering class plummeted to 2.2%. Southern California's black community was outraged that only about 100 African Americans enrolled that year.

The next fall, black enrollment doubled, to 4.5% of freshmen, after UCLA adopted a more "holistic" application review that considers hardships, among other factors, and black alumni privately raised more scholarship money and persuaded young African Americans to enroll.

Meanwhile, Asian Americans increased to become the largest ethnic group, to about a third of UCLA's freshmen and 43% of UC Berkeley's in fall 2012.

Efforts to boost minority enrollment at UCLA and UC Berkeley are diminished, in part, by the fact that other prestigious universities — private schools such as Stanford and public ones such as the University of Virginia — use affirmative action to attract high-achieving black and Latino students, said Richard Kahlenberg, a senior fellow at the progressive think tank Century Foundation. Kahlenberg is a proponent of considering economic hardship instead of race in college admissions.

At most schools in the 23-campus California State University system, admissions standards are less rigorous than at UC. As a result, the system has done little to counter the effects of Proposition 209 other than to broaden recruitment from various ethnic groups, according to Cal State spokesman Mike Uhlenkamp.

Black and Latino undergraduates, however, have a relatively small presence at the more competitive and engineering-heavy Cal Poly San Luis Obispo: less than 1% black and 13.4% Latino.

Some UC campuses have significantly larger enrollments of blacks and Latinos than others.

"It's not just about numbers," said Kidder, who has written extensively in favor of affirmative action. "It's about the campus climate."