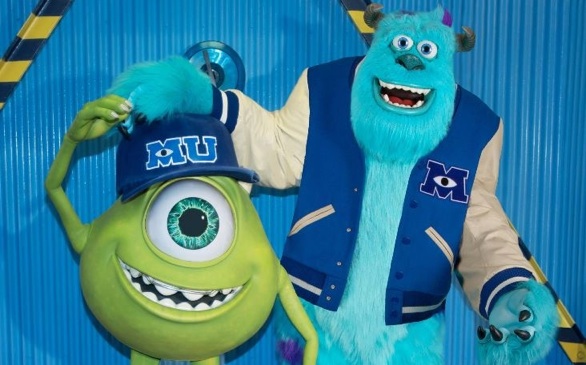 Monster's University shows audiences what our favorite monsters were up to before they began working on the scare floor. Naturally, all monsters have to learn how to be scary somewhere, and for Mike Wazowski, Sully and Randall, their education takes place at MU - the premier scare school.

The film proves just how well the teams at Disney and Pixar do their jobs, creating an animated movie that is finally 100 percent for adults as it is for kids. Appealing to the kids is easy: it’s a cartoon with lovable characters, in a bright fantasy world where human children are the ones considered dangerous. However, the humor in this prequel is undeniably directed towards adults who have been to college or at least understand the world surrounding a traditional experience.

With nods towards classic college humor films such as Animal House and Revenge of the Nerds, there are many funny moments adults will catch while children may not.

For example, the movie expertly and lightly mocks scary professors, college students whose names precede them, dorms, cafeterias and most of all, the Greek system. One of the main plot points of the film is a Greek sponsored “Scare Games,” a series of sorority and fraternity competitions to discover who is the scariest (and therefore the best group). Mike Wazowski and his band of fresh character misfits (including his once rival, Sully) compete to gain admission to MU’s prestigious scaring program.

Each plot twist and turn in Monsters University connects to an element of story in Monsters, Inc., even when it seems like the two movies couldn’t possibly fit together. Realizing where the characters came from and how their relationships were before their career lives is extremely entertaining.

Of course, there are also moral lessons in the film that are applicable for all ages. Lessons like how looks are not all that important, hard work will pay off, and friendship is about supporting one another.

The absolute brilliance in Monsters University is not only due to the clever college humor, the appealing new characters or even the subtle (yet effective) life lessons; it is all about the amazing detail put into the world of the characters. Every scene is covered in artistic set details that one would never be able to catch without seeing it more than once (Clever marketing tool? Maybe!). From the frat houses, to the school buildings and the names of the Greek groups (EEK, HSS, PNK, OK, etc), every bit of the flick was infused with clever monster and college themed humor.

In true Disney/Pixar fashion, the cartoon short at the beginning of the film is also adorable and entertaining – it’s entitled The Blue Umbrella. As its name suggests, the short is about a blue umbrella on an adventure around a busy city while being aided by simple street characters, such as a rain gutter and a storm drain.

I will let you in on a little secret…there is an additional scene after the main credits! Although not plot changing, the scene is very funny and worth waiting through what feels like hundreds of credited filmmakers.

For fans of Disney/Pixar, this film will not disappoint. I especially recommend it for college students, as most of the humor is brilliant because it is based on truth. Kids will adore this film equally. Monsters University is well on its way to becoming both a classic Disney/Pixar animated film while also holding its own in the classic college humor genre.

Monsters University is currently playing in theaters.
Article posted on 7/1/2013
This article has been viewed 1672 times.