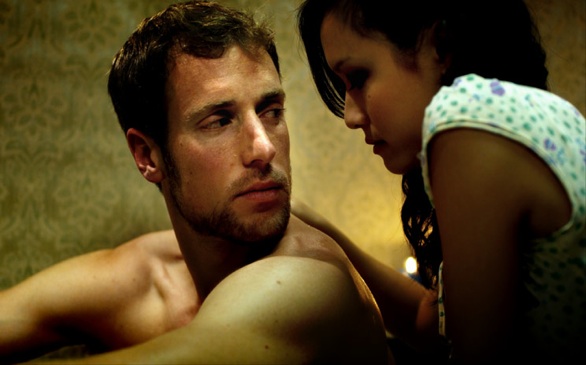 Vietnamese people are often associated with nail salons. However, it is rare that Vietnamese manicurists’ stories are depicted. In light of that, director Minh Duc Nguyen decided to use a nail salon as the perfect setting for his new film, Touch.

In the film, Nguyen uses the nail salon as a place where Vietnamese immigrant manicurists interact with a variety of American customers every day to illustrate a multi-cultural story that is romantic and emotionally stirring.

The trailer may package Touch as a quirky comedy, but it is far from that. The film delves and digs deep into human emotions. It also explores universal themes like loss, love and the importance of touch.

Touch revolves around three relationships: 1) the unlikely friendship of a Vietnamese American manicurist (Tam) and her Caucasian male customer (Brendan), 2) Tam’s struggling relationship with her strict and condescending disabled father and 3) Brendan’s faltering marriage with his aloof wife. The movie title’s multiple meanings are displayed over and over again in all three relationships.

The story starts when Brendan, the shy mechanic, visits the nail salon where Tam works. He decides to get a manicure because whenever he tries to be intimate with his wife, she always rejects him for the same reason: dirty hands (She tells him, “Your hands are filthy!”). Desperate to win his wife back, Brendan goes to the nail salon on a daily basis where Tam scrubs his hands and offers him advice on how to save his marriage. Their relationship deepens as time goes on until it develops into something that is hard to define; however, it is definitely beyond what one would describe as a normal friendship.

Porter Lynn’s (who plays Tam) acting skill is the film’s strongest aspect. Even though her acting is subdued, calm and almost too natural at times, she presents emotions that are so real and raw. Moreover, in compliance with her shy and reserved character, she reaches one’s heart and mind with merely her facial expressions. Needless to say, she is able to communicate without saying much at all. The other cast members deliver realistic and above average acting as well.

Touch is a beautifully paced artistic piece with the perfect blend of drama and humor. It will have you tearing up at parts and laughing out loud at other times. This quietly witty and sensual film will demonstrate that with a simple touch, we can reveal our deepest longings, give the utmost pleasure to others and even heal a wounded soul.

Touch is available on DVD and digital platforms.
Article posted on 7/1/2013
This article has been viewed 2491 times.