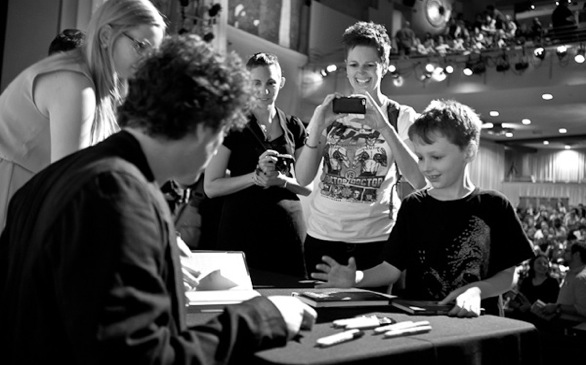 On a particularly hot afternoon, people (old and young) lined up for what appeared to be a mile outside the Alex Theatre in Glendale for Live Talks Los Angeles. Paying no mind to the heat wave that has stricken Southern California, they sat reading their new book, debating over motifs or else laughing amongst each other, biding their time happily. They were happy because they were waiting to see one man dressed all in black with a bit of a Tim Burton persona, a man whose words they have read and studied for more than three decades and whose stories have made a deep impression.

Neil Gaiman is an author who has published in almost every form of the written word imaginable. He’s scripted television shows and written comic books. He’s topped the charts in the young adult literature space with Coraline, The Graveyard Book and, as Gaiman revealed to the packed house filled with devoted and doting fans, his newest novel, The Ocean at the End of the Lane.

The book is as personal as books can get - it was supposed to be a short and sweet love letter to his wife. As he detailed on stage to Entertainment Weekly’s Jeff Boucher, he started writing it and realized it wasn’t a short story or even a novella, but instead it is a full-fledged novel. How lucky for us.

At Live Talks, Gaiman read an excerpt and then surprised the audience with a bit of his new children’s book that will be released in September. He took questions from the audience, and Stephen King even emailed the organizers of the event to ask Gaiman a question. Following the onstage conversation, Gaiman stayed until 2:40 a.m., spending more than five hours signing fans' books (the Alex Theatre has more than 1,400 seats for sale, and this event sold out). At 2:50 a.m., he then hopped on his bus for San Francisco, the next leg of his tour. The man is brilliant, generous and incredibly tireless.

The good people at Live Talks have one more event this season. On July 25 at the All Saints Church in Beverly Hills, writer Reza Aslan will sit down with funnyman Rainn Wilson for a conversation about life, religion, Aslan’s new book and more. For more information on this event (and future ones), click here.