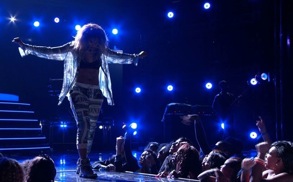 Sunday night, L.A. Live was rocking during the annual 2013 BET Awards show. The best in the entertainment industry came out to celebrate black achievement. With such great talent gracing the stage, it was a tough decision, but here are some of the best and worst performances of the show!

BEST
1) Cadillac Lifetime Achievement Award Tribute to Charlie Wilson
Easily the best performance of the night was the tribute to music legend Charlie Wilson. Big stars India Arie, Jamie Foxx and Stevie Wonder performed some of Wilson’s greatest hits. However, the real fun began when Wilson himself took the stage to perform. After accepting his lifetime achievement award, Wilson brought down the house singing some of his greatest solo and Gap Band hits with the help of Justin Timberlake, Pharrell Williams and Snoop Dogg.

2) Robin Thicke, T.I. and Pharrell
Thicke took to the stage to perform his new hit, and current song of the summer, “Blurred Lines” with T.I and Pharrell by his side. Thicke’s flawless vocals, sexy backup dancers and sultry stage presence made for a great performance. You could even see stars like Nick Cannon and Jamie Foxx dancing in the crowd.

3) R. Kelly
R. Kelly single-handedly brought an entire crowd to their feet during his performance. The king of R&B had fans begging for more as he performed snippets of some of his most popular hits in an incredible medley. The best moment of the set was during “Bump N’ Grind,” where the audience got as loud as R. Kelly as they sang along to the smooth chorus. This performance was a fan favorite.

4) Ciara
Ciara’s performance was high energy from the start. Nicki Minaj opened the set with her verse from the Ciara’s newest single “I’m Out,” but the singer stole the show as she burst onto the stage and started right off into an elaborate dance routine. Ciara slowed it down for her second song, “Body Party.” Her performance showcased her versatility as both an amazing singer and dancer.

5) Janelle Monáe
Janelle Monáe took to the stage for a funky finale. She gave an upbeat performance of her hit “Q.U.E.E.N.”, bringing up legend Eryka Badhu (and her Poodle!) to join in on the fun. Monáe and Badhu had the audience on their feet, and their performance was the perfect way to end a great show.

2) Miguel and Kendrick Lamar
Miguel performed his hit “How Many Drinks” featuring Kendrick Lamar, and while the vocals were great, the performance overall fell short because of low energy levels from both artists. There were tiny sparks of excitement from the set, but they paled in comparison to the other performances from that night (On the bright side, no one was injured during this performance).

3) Chris Brown and Nicki Minaj
Chris Brown opened the award show with an energetic medley. Brown kicked it off with top hit “Fine China”, segued into “Don’t Think They Know” in tribute to Aaliyah and finished with an intense dance sequence with a surprise cameo from rapper Nicki Minaj. As expected, Brown impressed everyone with his stunning choreography (he ended his set with a front flip onto the main stage). Brown put on a great show, but this performance ranks as one of the worst because of Nicki Minaj’s cameo. Minaj had to be censored multiple times due to explicit language, and even then, some curse words slipped through the cracks, creating complaints from many viewers.

What was your favorite performance/moment from the 2013 BET Awards show? Leave your comments below.