Colin Farrell: Trades Action for Honesty in A Home at the End of the World 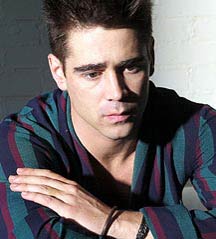 At this point, Colin Farrell doesn’t need to worry about social graces. The rugged Irish export is one of Hollywood’s most drooled-over actors, as much for his casual, sub-Brando intensity as for his gossip-worthy, off-screen outlaw persona. So when Farrell enters a suite at the Regent Beverly Wilshire hotel looking gloriously unkempt — a beer in one hand and cigarettes in the other — the effect reeks of honesty and unforced charm. Though his mother might disapprove, Farrell can afford to be himself.

"It’s because I’m an actor," says Farrell. "Otherwise, nobody would care that I drink and smoke. This is my day off."

In his new film, A Home at the End of the World, Farrell is less himself than ever before. He plays Bobby, a long-haired, puppy dog orphan who moves to New York City to cultivate an unlikely ménage a trois with his gay best friend (Dallas Roberts) and his free-spirited roommate (Robin Wright Penn). Yet the soft-spoken, dependent Bobby fears only the thought of being left alone.

"He’s so damaged that he’s been completely un-damaged," begins Farrell casually, in his thick Irish brogue. "He’s experienced so much loss in his life that he’s reverted back to the perfect form. What we were like when we were born, before we became so fucking cynical."

The film, directed by Michael Mayer and adapted from a novel by Michael Cunningham, also presents a thought-provoking distinction between freedom and domesticity. "Once [the three] go back to less rules and less restrictions, they inevitably stop breaking the rules," says Farrell. "They don’t go out and get pissed or go shopping; there’s no joints being smoked, music isn’t [being] played loud. Once they’re outside the realm where rules are made to be broken, they find they don’t want to bother anymore," he adds.

For all its qualities, the reason readers have likely heard of A Home at the End of the World is Farrell’s infamous full-frontal nude scene, which has since been excised for "artistic purposes." Farrell, who can hardly be called a Puritan, is baffled by the hoopla.

Obviously, Farrell has begun choosing roles more adventurous than those he played in S.W.A.T. or Daredevil. "For the first time in my life, I’m in a fortunate enough position where I can, by and large, pick and choose roles. If I’m going to give four or five months of my life to something, even if I’m overpaid — four or five months away from my son and family and friends — I better believe in it at some level."

Farrell’s next two projects seem like possible artistic apexes in an already storied career. First up is Oliver Stone’s epic Alexander, in which Farrell takes on the title role as the conflicted king. "Stone isn’t appeasing anyone; he isn’t afraid of what people won’t be able to handle," says Farrell.

Farrell’s other film is an adaptation of John Fante’s beloved L.A. novel Ask the Dust. Farrell will play Italian immigrant Arturo Bandini, a destitute, fledgling writer who becomes infatuated with a local waitress, played by Salma Hayek. In lieu of 1930s L.A. landmarks like Bunker Hill and Angels Flight, the film was shot in Cape Town, South Africa.

So with Farrell’s busy and successful career, where are his priorities? "I don’t look too far into the future for the risk that I’ll miss the present — and the present’s pretty good. I’m working hard. I have a beautiful 10-month-old son. And if I can go to work and still be with him, then I’m fine."

At first glance, Farrell doesn’t seem the traditional family man, but an honest, uncompromising spirit should be a treasured quality in a father. Just keep the booze and cigs out of the nursery.

A Home at the End of the World is currently in theaters.